Spaghetti carbonara is one of my biggest food weaknesses. It’s also a dish that I used to mess up all. the. time. If you’re not familiar, spaghetti carbonara is made with bacon (you can use pancetta, guanciale, or even regular breakfast bacon), cheese, and eggs. The eggs create a silky smooth sauce, and the cheese and crisp bacon both add the perfect salty notes to the dish.

So what’s the problem?

Well, let’s start by talking about what happens to beaten eggs when you add them to a hot pan. Because that’s the biggest mistake that you can make when preparing spaghetti carbonara––accidentally creating a bowl of perfectly al dente spaghetti, with crispy bacon, parmesan cheese, cracked black pepper and scrambled eggs.

I’m not the only one, either. When I was traveling in Rome––the birthplace of this dish, in the mid-20th Century (thank you Wikipedia)––I ordered spaghetti carbonara and was given a plate of pasta with little pieces of scrambled egg yolk!

Well, I’ve discovered the solution. A lot of carbonara recipes will tell you to simply turn off the heat under the pan before stirring in the eggs, to prevent them from scrambling. But I’ve found that the residual heat in the pan can still cause that sneaky scrambling effect.

The key is putting the eggs (along with the cream and cheese) in the serving bowl, adding the hot bacon, bacon fat, and some of the pasta water to temper the eggs, and THEN tossing in the piping hot pasta. Slap a plate over the dish to allow everything to heat up, and voila! PERFECT spaghetti carbonara, every time. I have to thank Food Network personality Tyler Florence for this particular nugget of wisdom.

(For those purists out there who object to adding cream because it is not traditional, please understand this is just how I like to prepare the dish! You are totally free to make a 100% authentic version and ignore my recipe.)

This spaghetti carbonara recipe uses whole eggs, rather than just egg yolks, and half and half to add a bit of richness. I think that adjustment adds a silkiness and lightness to the dish that you don’t get when you’re cooking only with egg yolks. I also add a pinch of nutmeg to my carbonara for added flavor, but it’s completely optional! 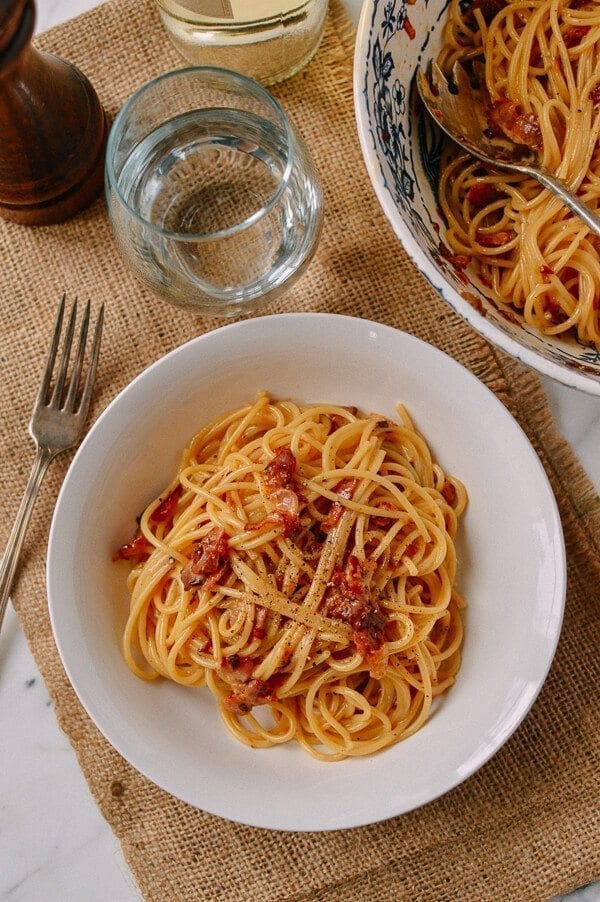 Just one more quick note before we begin: this recipe can contain some undercooked egg.

Bring a large pot of salted water to a boil for the spaghetti. Heat 2 tablespoons olive oil in a large skillet over medium heat. Add the bacon/pancetta and onion. 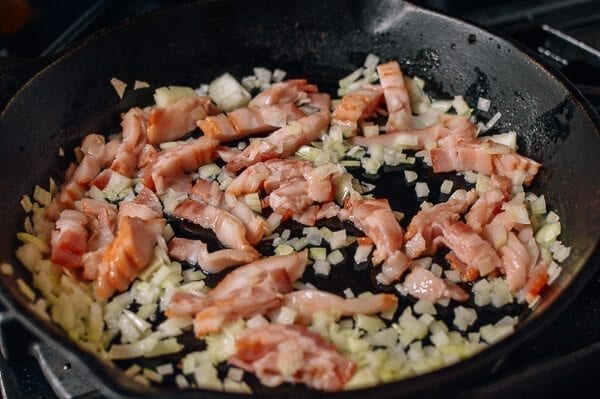 Cook until the onion is caramelized and the bacon is crisp. 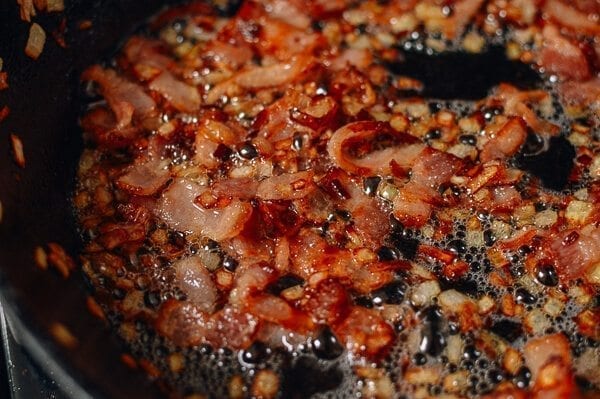 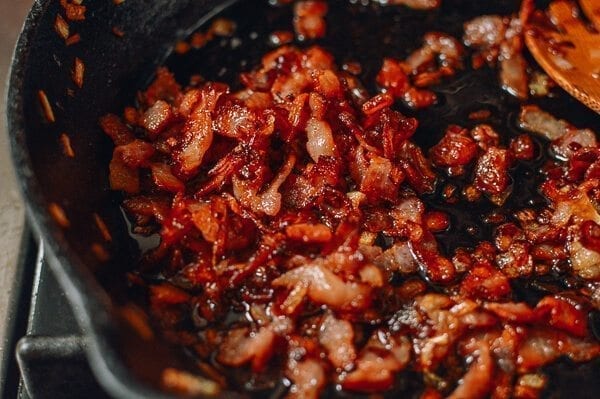 By now, your water should be boiling. Add the spaghetti. Make sure to cook until al dente––don’t overcook the pasta! Meanwhile, in a large serving bowl, whisk together the eggs, half and half, and cheese. 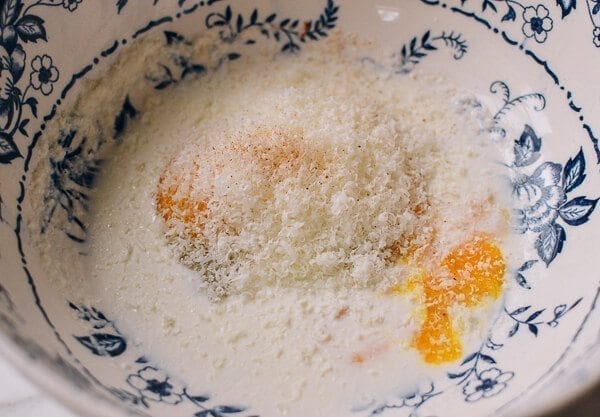 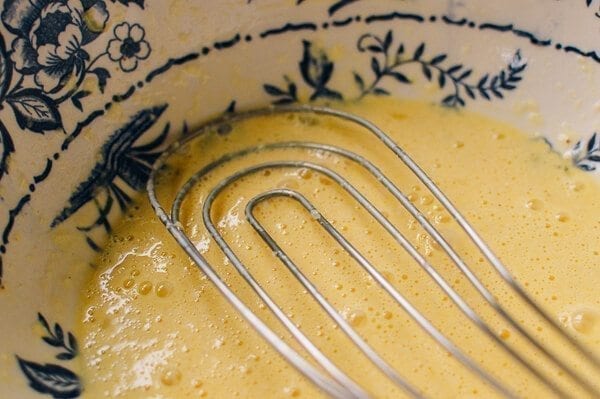 Scrape in the bacon and onion, along with the cooking fat. If it’s really hot and sizzly, allow the bacon to cool off for 1-2 minutes in the pan before adding it to the bowl. 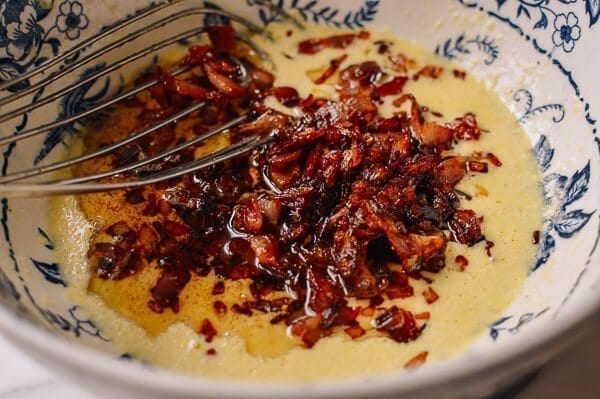 Before draining the pasta, scoop out about 1/3 cup of the cooking water and slowly whisk it into the bowl with the bacon and eggs. Drain the spaghetti and add to the bowl. 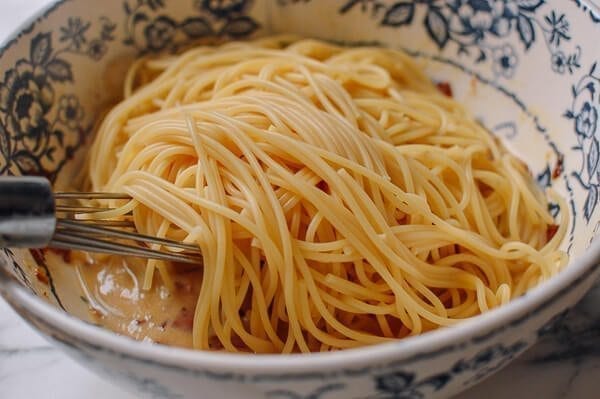 Toss quickly and place a plate on top of the serving bowl to cover completely. Let sit for 5 minutes. Remove the plate and toss with black pepper and nutmeg (if using). 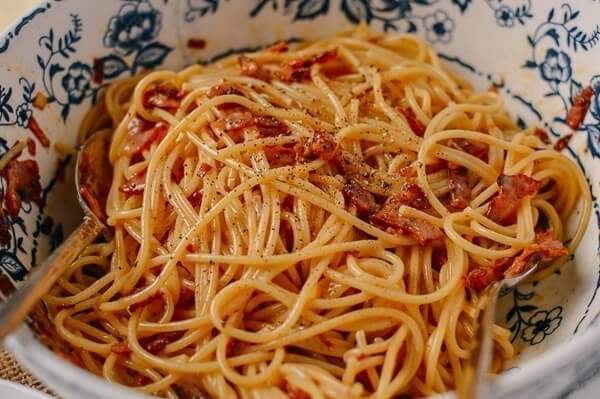 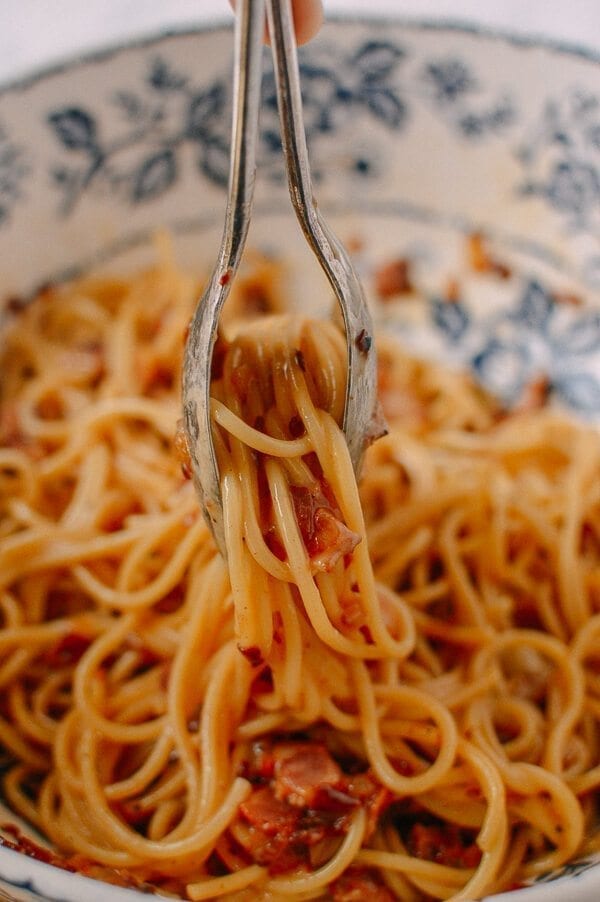 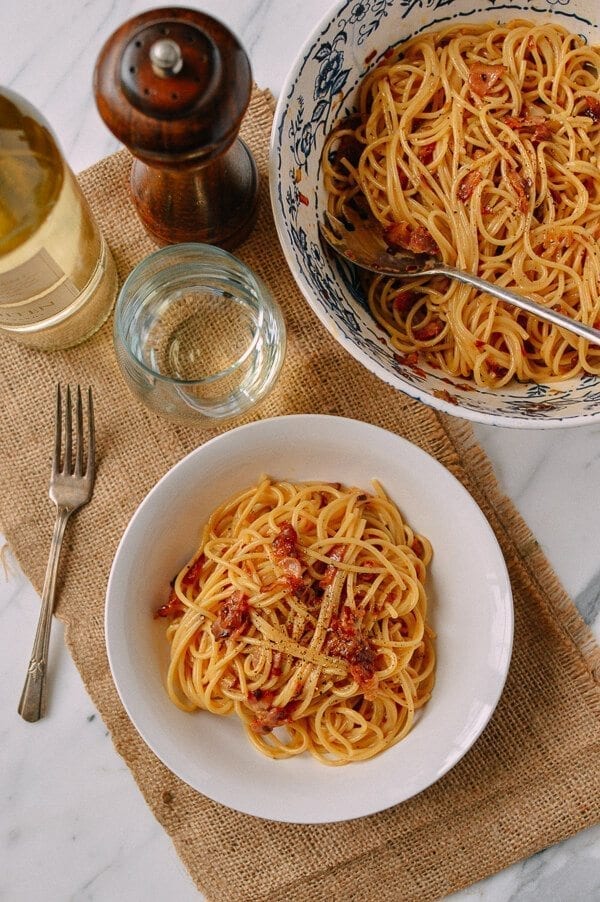 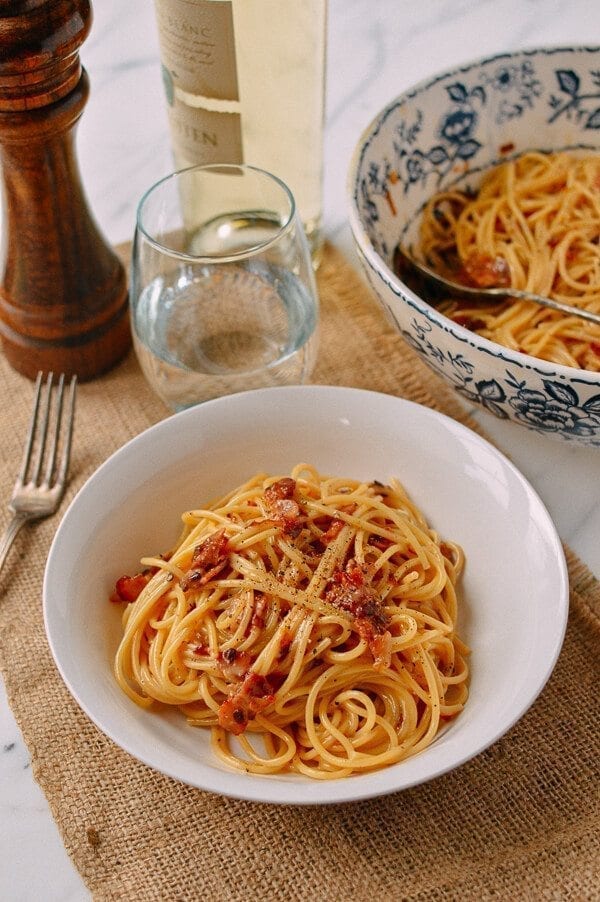 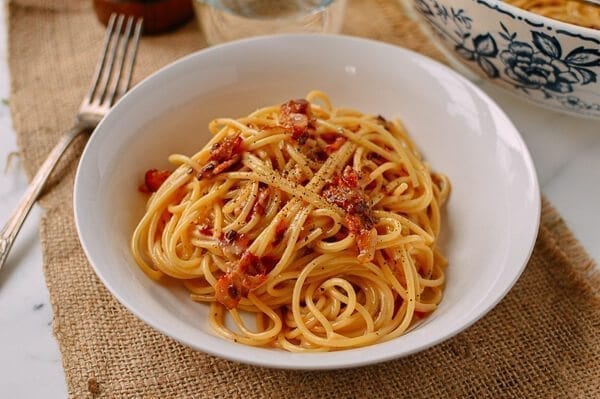