I learned this Chinese Roasted Ribs recipe from my father, who worked as a cook. In their heyday in the 1970s, people would pile in from New York City to the summer resorts in the Catskills, where we lived. People call it the Borscht Belt now, but it was just home to me.

My father started out working as a roast cook in these resorts. He then moved on to become the head chef at a local Holiday inn in Liberty, NY, where they served continental and Chinese food. We’d hand out a menu with two sections, where the 12 oz. Junior Steak, Long Island Duckling, Cordon Bleu, and Chicken Marsala were listed alongside the shrimp with lobster sauce and Moo Goo Gai Pan.

Soon, word got around about the Holiday Inn’s restaurant, and the mostly Jewish guests vacationing at the Grossinger Resort about a mile away would come to take a break from Kosher food. This is where I made my first foray into the restaurant world. I worked there for 4 summers as a bus boy clearing and setting tables and kitchen man making Caesar salads, chopping vegetables, boiling lobsters and making shrimp toast.

I quickly learned that a Chinese Chef is only as good as his BBQ ribs. How delicious, or not, your Chinese roasted ribs were,  was one of the standards of measurement in those days for being an accomplished Chinese (take-out-style Chinese, anyway) chef. Only the head chef could or was allowed to make the BBQ sauce and it was a well-guarded secret.

I have fond memories visiting my father in that kitchen when I was younger and still not old enough to work. I would sneak to the back of the kitchen and use my handy pocketknife to cut off a sliver of meat just as it came out of the oven. It was totally worth the risk of being scolded for nicking food! My father would later use this recipe at the take-out restaurant he opened in New Jersey.

We used to make this Chinese roasted ribs sauce in a 5-gallon bucket at a time, but I have scaled it down to make enough for 2 racks of ribs. Here’s how you make it!

Start by making the BBQ sauce. This recipe makes enough for 2 large racks of ribs. You can also just make 1 rack, and then store half of the sauce in an airtight container for another time. 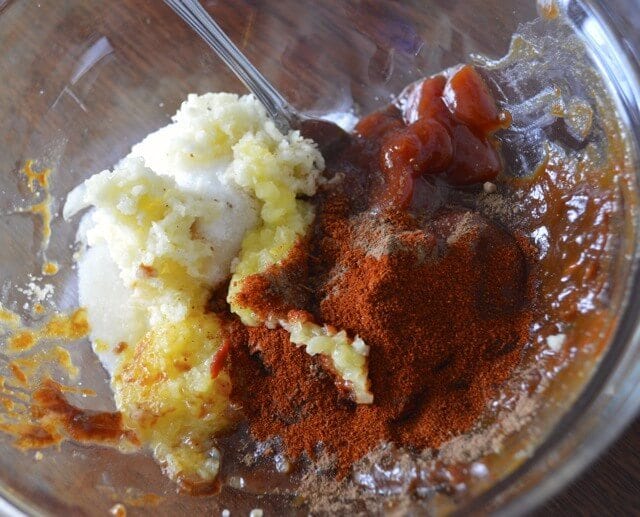 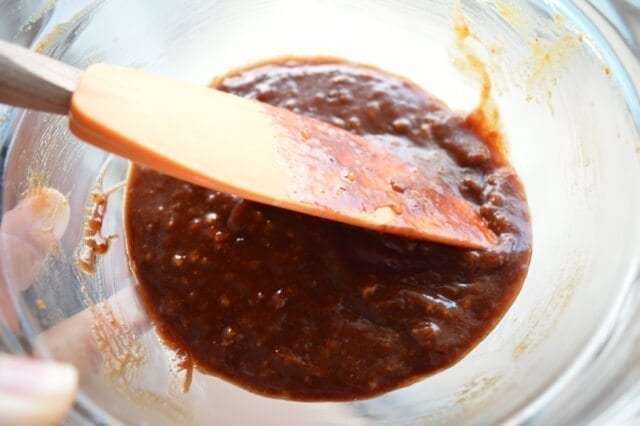 Spread half the sauce on a rack of ribs and marinate overnight in a plastic bag. Store the leftover sauce for later use.

Preheat your oven to 325 degrees.  Prepare a roasting pan or sheet pan lined with heavy duty foil for easy clean-up.

Add about 2 cups of water to the pan so there is about a half inch of water.

This keeps the ribs moist and catches the drippings. Place a roasting rack on top of the pan and place your ribs on the rack (meaty side of the rib up) and place in your preheated oven.

Slow roast the ribs for about 30 minutes and turn it and continue roasting for another 60 minutes.

You will need less time if using baby back ribs since they are smaller, more tender and hence, easier to cook. Add water to the roasting pan as the water dries up during the roasting process.

If the ribs look a bit pale, on the end, you can finish them with a few minutes under the broiler. 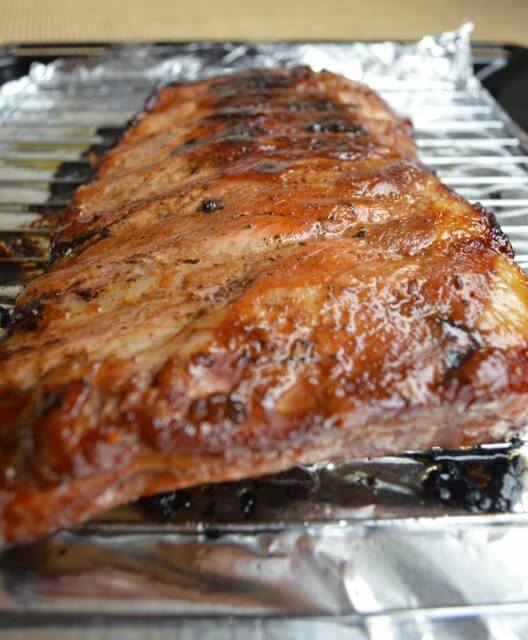 They’re not usually cooked for as long as this in restaurants. But this is a home recipe, so we can afford to take more time. Plus, I personally like the combination of the Chinese BBQ flavor with the falling-off-the-bone feeling of Southern BBQ.

Enjoy this one and try to serve these Chinese roasted ribs right out of the oven for maximum delight! 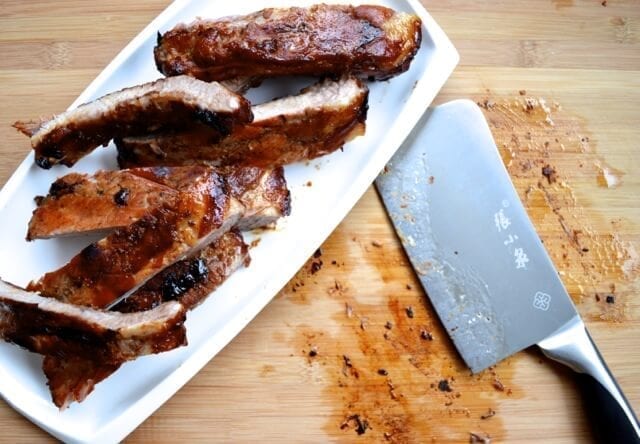