The first time I went to Sabrina’s was the day after a painful all-nighter and exam that pretty much kicked me while I was down. Needless to say, this stuffed french toast was immediately the best thing in my life. If you’re sad, down-trodden, stressed, or just plain tired, this french toast will pick you up and make you right again.

Of course, I made it my personal mission to create a copycat recipe and, after two and a half years of tossing french toast-related ideas around in my subconscious–This. Is. It. Without further ado, Sabrina’s Café copycat stuffed french toast! 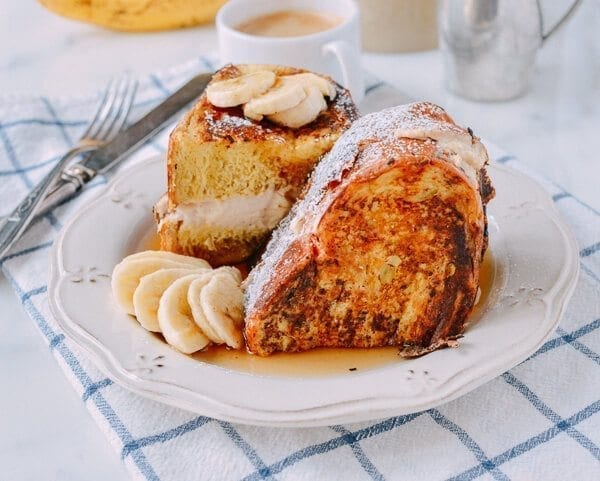 Start by making the filling. In the bowl of a mixer fitted with a paddle attachment, stir the cream cheese and granulated sugar until light and fluffy (about 5 minutes). When the cream cheese is nice and fluffy, slice one and a half of your bananas and mix into the cream cheese mixture. Reserve the last banana half for later. Stir in 1/4 teaspoon cinnamon.

Next, prep the egg mixture. Beat together the eggs, half-and-half, milk, and another 1/4 teaspoon cinnamon in a shallow dish. Slice your challah from the center into four 1 1/2-inch thick slices. Save the ends for whatever your heart desires! (Or you can eat it by the fistful until it’s gone as I usually do…)

Divide the cream cheese mixture in half and spread evenly on two slices of challah. Top with the remaining slices of challah so you have two challah cream cheese sandwiches. They will be big, and this is the point when dieters will make horrified faces and close this tab–but for the rest of you, carry on!

Quickly roll your first challah sandwich in the egg mixture, being sure to coat the entire thing evenly. Don’t let it sit for too long though! We don’t want the challah to be soaked through. 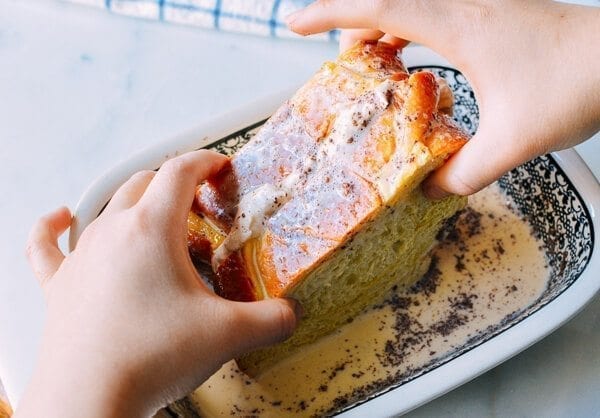 Heat a cast-iron or non-stick skillet over medium heat. Melt a tablespoon of your butter in the pan to coat, and carefully place the first sandwich in the pan. Brown the french toast on all sides (including the edges), making sure to keep the heat at medium or medium-high. You don’t want it to cook too fast, as the challah needs to get warmed through. The whole process takes around 10 minutes. Repeat the process with the second sandwich. 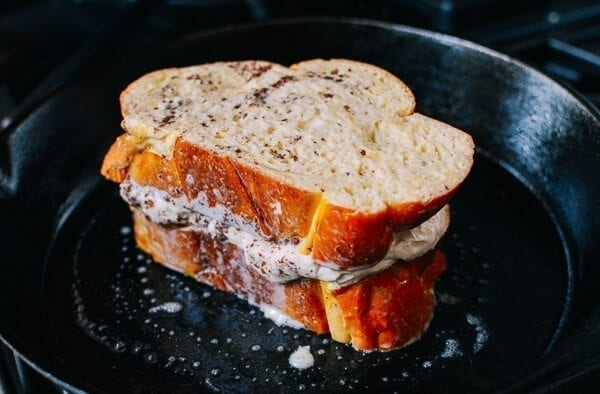 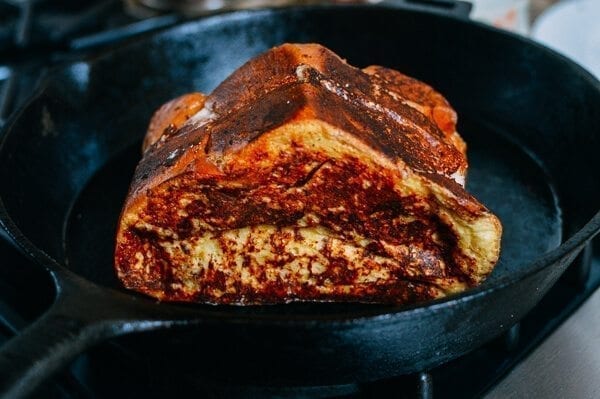 Cut each stuffed french toast in half (the recipe serves four). Top with the reserved banana, sliced, along with maple syrup and a light dusting of powdered sugar. 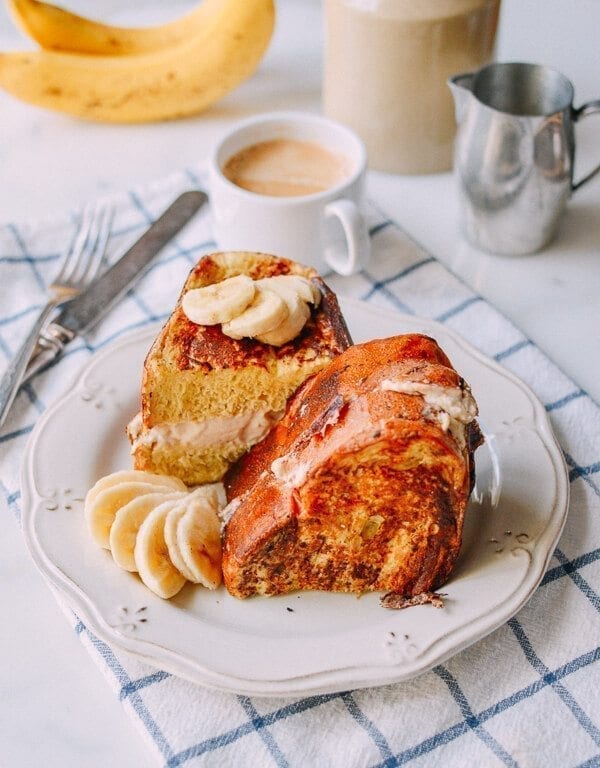 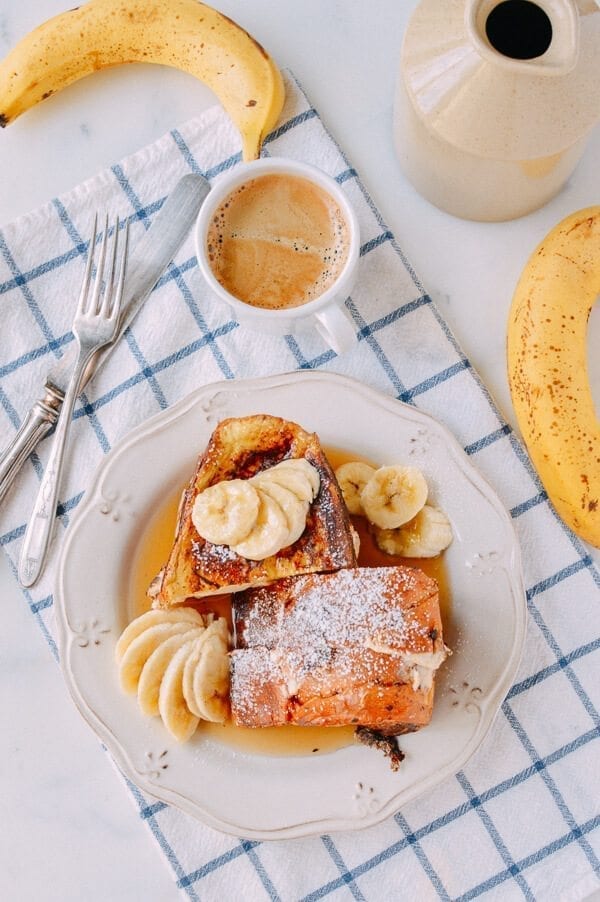 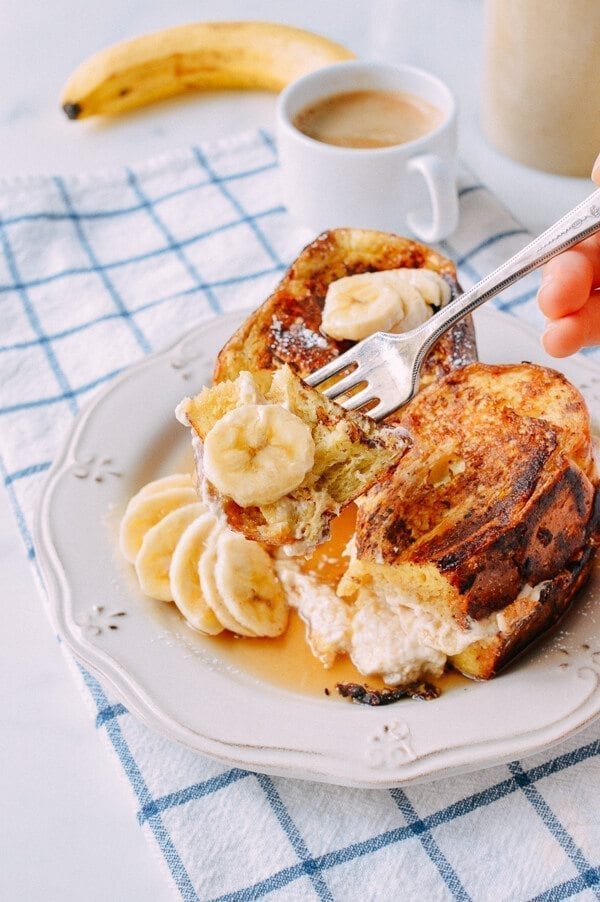 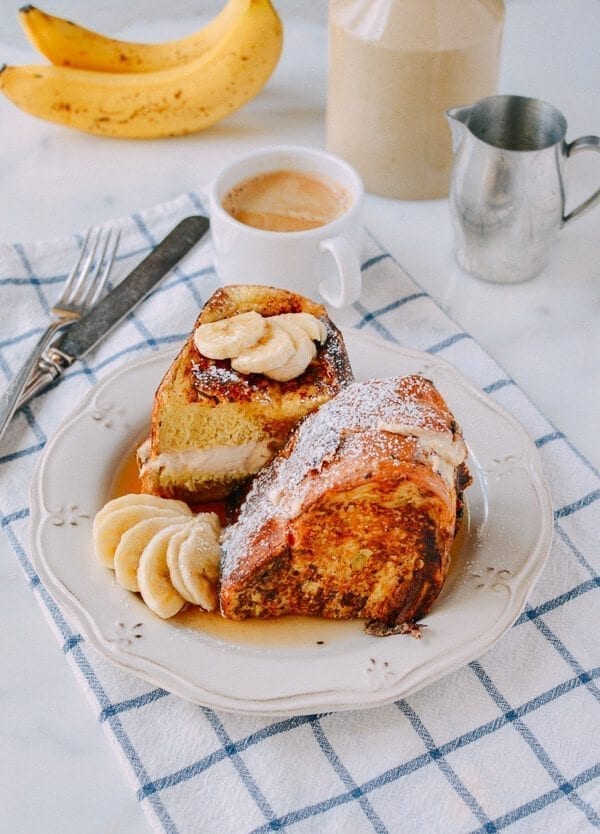