Sesame chicken is a fairly common dish found in most Chinese restaurant menus, and it’s likely you’ve ordered it at some point. More likely is that you’ve had it at a Chinese buffet. Every Chinese buffet restaurant has this dish on their steam table, to the point that it’s become as expected as having an order of fries at McDonalds.

Orange Chicken is also a common chicken dish and I you like it you really have to try our Orange Chicken version cooked with proper aromatic spices – simply delicious.

I have to admit that my parents did not have sesame chicken on their takeout restaurant menu, which of course could mean that they missed the boat when they were menu planning, or maybe that sesame chicken became popular just in the last 20 years, as Chinese buffets came into vogue. I remember when we first moved to New Jersey from upstate New York to open the restaurant, there were no such Chinese buffets anywhere.

Iremember this because a dear family friend we called Uncle Freddy drove all the way down to New Jersey to sample one of the first Chinese buffet restaurants in the area. It was a big deal – all you can eat, over twenty dishes to choose from, free soda, and dessert was included with the meal! Now that was progressive.

During the evolution of the Chinese buffet, some smart guy decided that sesame chicken was going to be one of those twenty core buffet dishes; but what is Sesame chicken really? You’re probably thinking, isn’t it like that General Tso’s chicken? No, not really, because the General likes broccoli with his fried chicken, and he likes it spicier, more tangy, and with a darker sauce.

Sesame chicken is generally sweeter than General Tso’s chicken, although it still has a taste of vinegar to balance the sweetness of the dish. It also has lots more sesame seeds in it, because well…it is sesame chicken right? 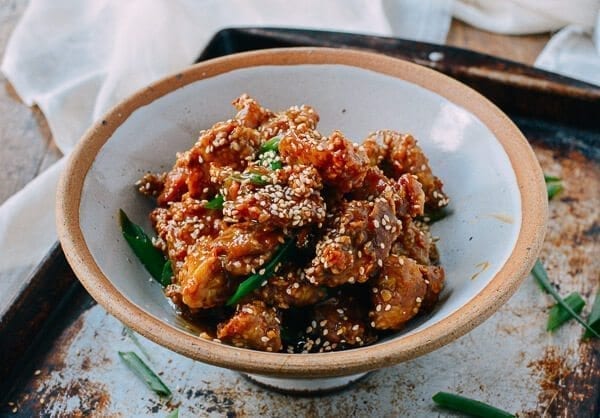 So I present to you our version of sesame chicken, which at Sarah and Kaitlin’s urging, uses the oven fried method for a healthy touch to the dish. Can we call it skinny sesame chicken? Seems like a bit of an overstatement, but we’ll let you decide!

Mix the chicken with the cornstarch, sesame paste, salt, and Shaoxing wine and set aside for 20 minutes. Then mix the flour, sesame seeds, and white pepper in a separate bowl. Preheat the oven to 475 degrees. 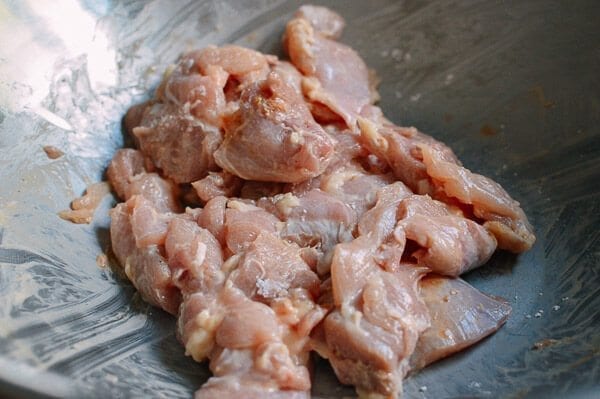 Use your hands to mix the chicken and marinade until there is no standing liquid. Dredge the chicken pieces in the dry mixture, and place them on a sheet pan lined with parchment paper or nonstick foil. 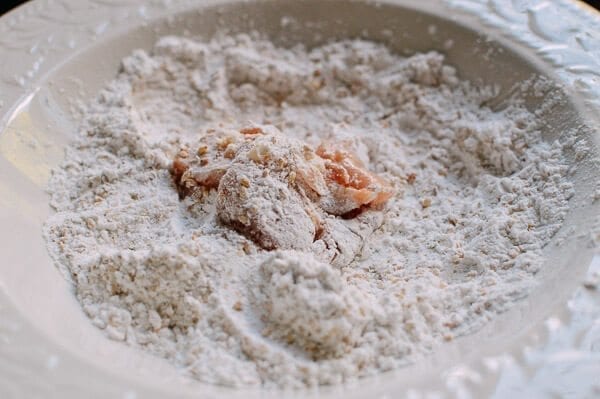 Bake at 475 degrees for 8 minutes on the top rack. Flip the chicken pieces and broil on low for 3 minutes until golden brown. Remove from oven. 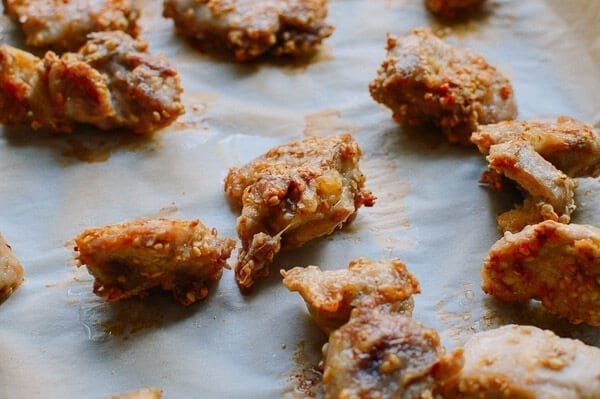 Heat your wok to medium heat and add oil and garlic.

Stir for 5 seconds, and then add the Shaoxing wine. After another 5 seconds, immediately add the chicken stock, rice wine vinegar, sugar, soy sauce, dark soy sauce, and sesame oil until everything’s at a simmer.

Gradually add the cornstarch slurry to the sauce while stirring constantly. Let simmer for 20 seconds. The sauce should be thick enough to coat a spoon. Add the chicken and scallions, and toss until coated with sauce. 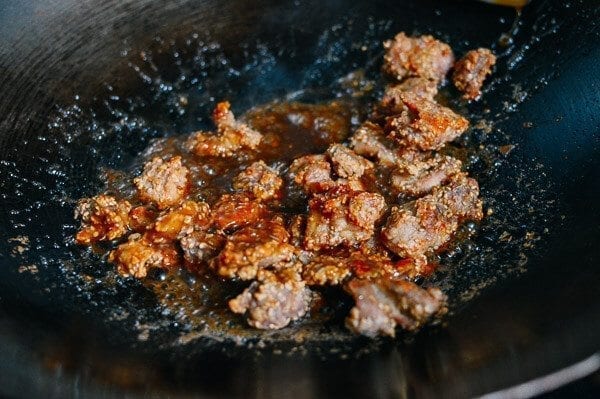 Garnish your sesame chicken with toasted sesame seeds and serve. 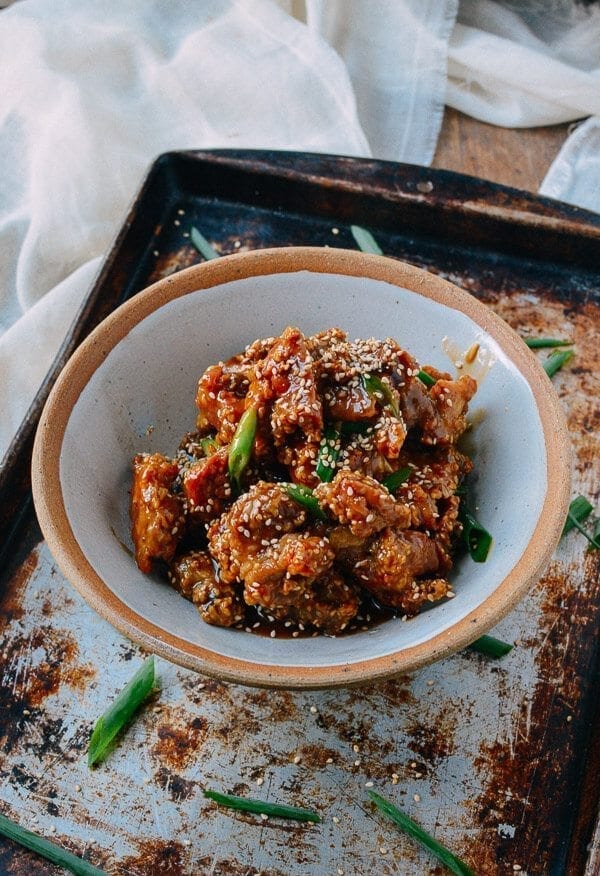 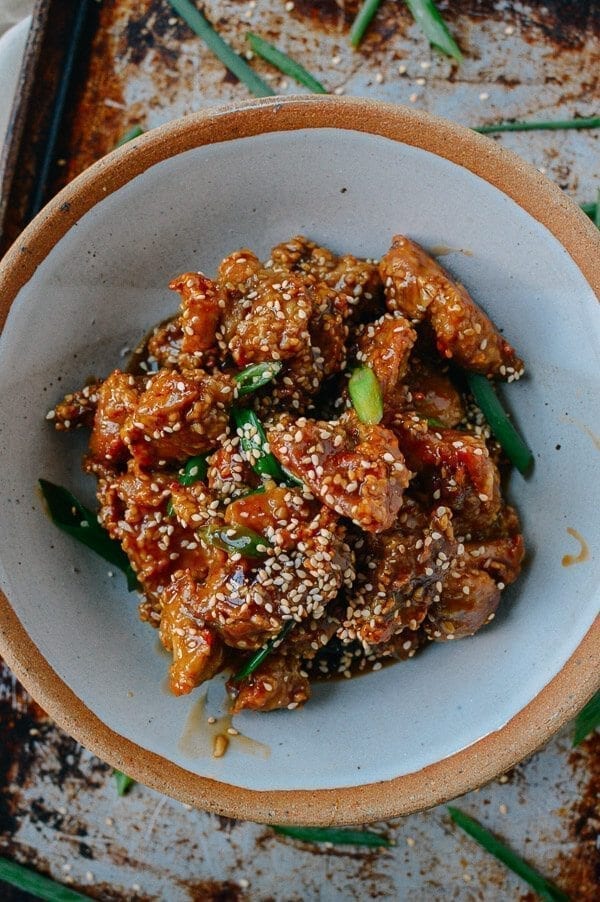