On a trip to Montreal four years ago, we tried the Montreal-style bagel for the first time. For all you fellow New Yorkers/New Jerseyans who may not have known that such a cousin to our beloved NY bagel exists, the basic gist of it is as follows:

Like the NY bagel, the Montreal bagel was also brought over to our neighbor to the North by Eastern European immigrants. Their differences lie in the fact that they were brought over by different immigrants, of course, who had a slightly different flair for making bagels that were sweeter and denser. And baked in a wood-fired oven.

Upon hearing of this on our Montreal trip, we skedaddled on over to one of the most famous Montreal bagel shops…Fairmount Bagel (as far as I know, there’s a healthy rivalry between this place and another by the name of St. Viateur). 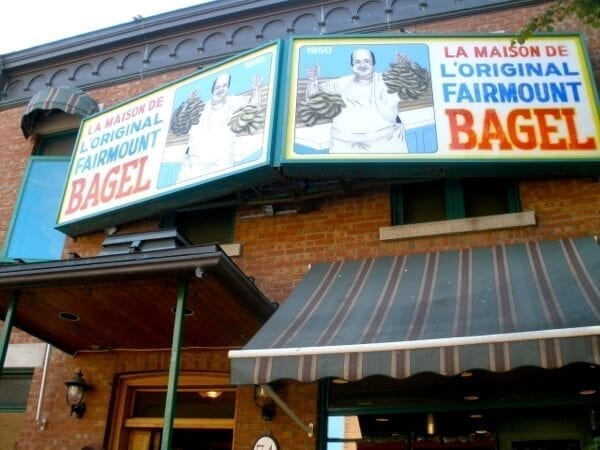 We stood on line on a sunny Sunday morning, and quickly noticed that most people weren’t there to order a la carte. It wasn’t at all like, “hey there, can I get plain cream cheese on a toasted everything bagel?” It was all, “Hello, can I get a two dozen sesame and a dozen poppy seed?”

They were rolling and baking bagels right there in their enormous wood oven, and every bag of Montreal bagels passed over the counter was hot and fresh. They couldn’t make them fast enough. There was a sense of scarcity in the air, like, “maybe we should think about getting a few dozen…what’s that they were saying about freezing them for later?” Indeed, they were handing over hot bagels in large paper bags, along with plastic bags that included instructions on storing them in your home freezer.

I got the feeling that many of the customers grabbing their bagels and easing their cars back out onto the road weren’t exactly locals. They were Montreal bagel pilgrims–pilgrimage finally completed and ready to go back home. 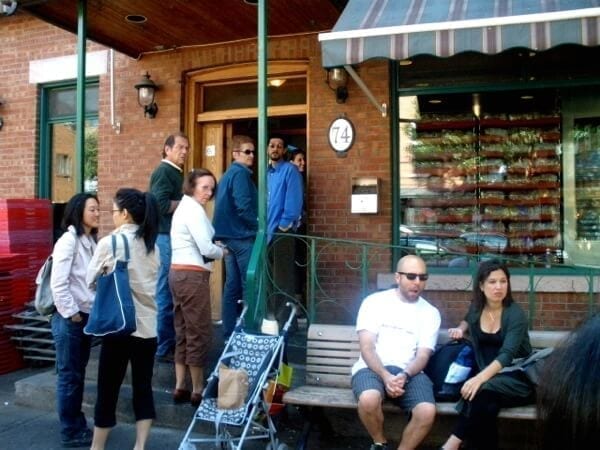 We’re none of us the patient type, so the minute we got our hands on a few bagels of our own, we just set up on the back of the car and cracked open the cream cheese. 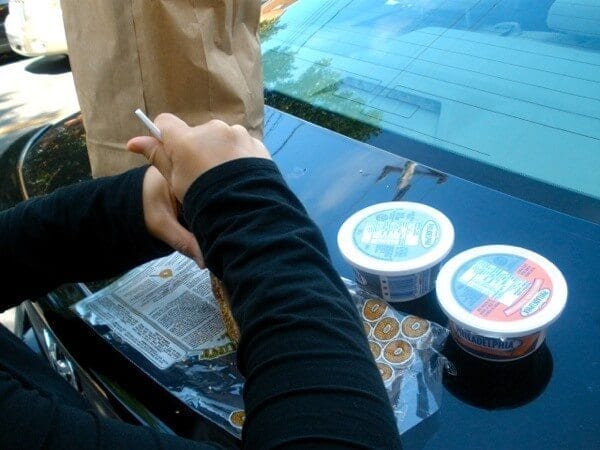 Montreal bagels are decidedly different from the NY version. It’s noticeably sweeter–from the use of honey and/or barley malt syrup. Definitely less fluffy and doughy. But what was really different about them was the ever-so-slightly scorched, dappled exterior–the result of a seriously hot wood oven.

Upon returning home, we did store the leftovers in the freezer, but they didn’t last long. Without a trip to Montreal in sight any time soon, we embarked on a quest to make our own homemade version of Montreal Bagels, and have since made them over and over again.

Here’s the famous Montreal bagel recipe! It was adapted from this recipe published in the New York Times in 1987. 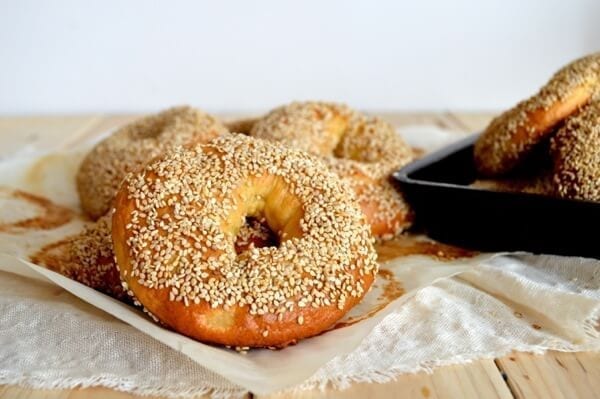 In a large bowl, stir together the water, yeast, sugar, and salt until dissolved. Stir in the egg, egg yolk, oil, and ½ cup honey. Whisk it all together until well combined.

Gradually add enough flour to make a dough, and knead until smooth (about 10 minutes), adding more flour as necessary to prevent sticking. Once the dough is firm and smooth, cover with an inverted bowl and allow it to rest for 15 minutes. 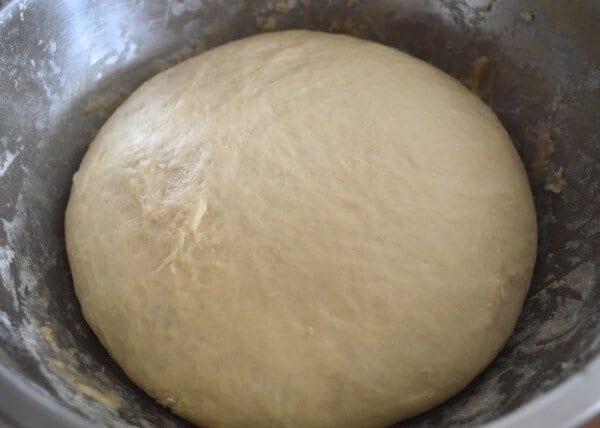 Punch out the air and divide into 16 pieces. Roll each piece into a 10-inch rope, and curve each one around your hand, pressing together the ends to make a bagel shape Gently rock your hand back and forth on the seam to seal the two ends. Flour the bottoms of the bagels and place on baking sheets lined with parchment. Cover with a towel and allow bagels to rise for 30 minutes. 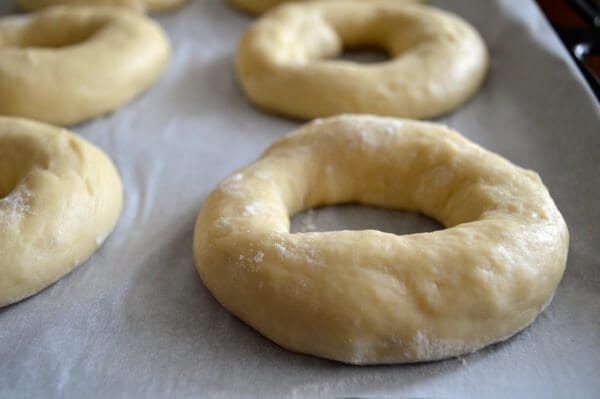 Preheat oven to 450 degrees. Bring a wide, shallow pot of water to boil with your barley malt syrup or honey, and lay out your sesame seeds on a plate. After the bagels have risen, boil them each for about 30 seconds on each side. 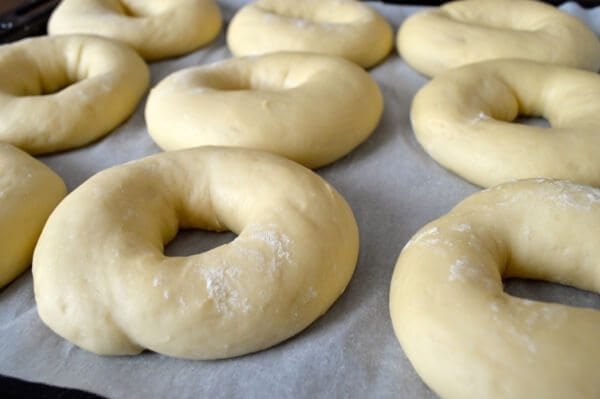 Lift them out of the pan, shaking off excess water. Cover with sesame seeds, and place on the baking sheet. 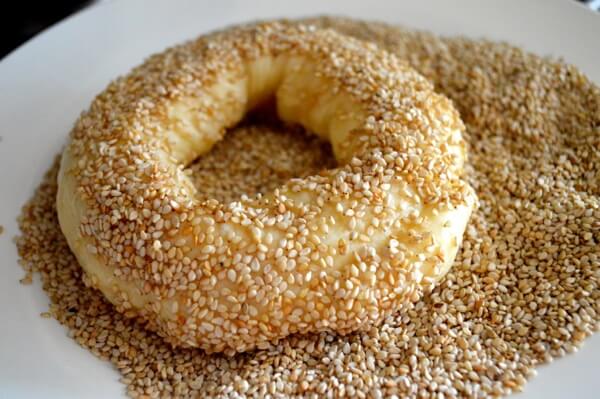 Bake for 25 minutes until golden, rotating the pan halfway through cooking. 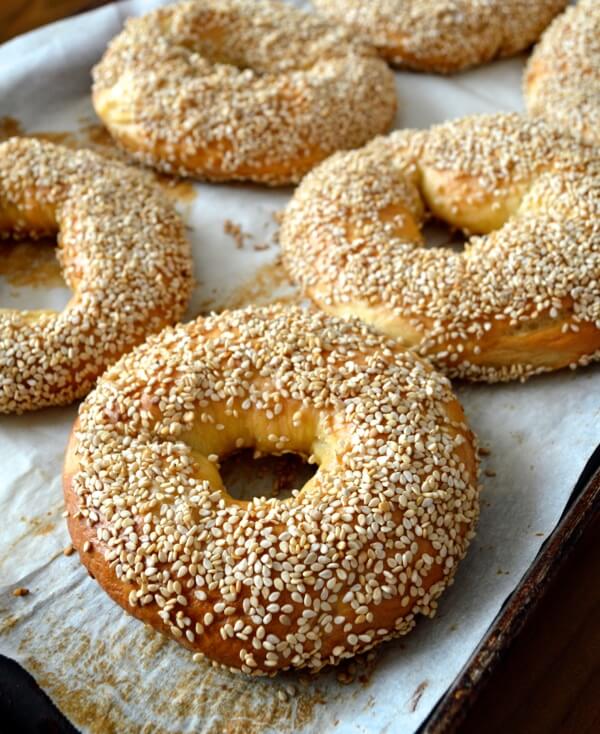 The Montreal bagels freeze well so to save for later, transfer cooled bagels to a plastic bag, remove as much air as you can, and freeze. 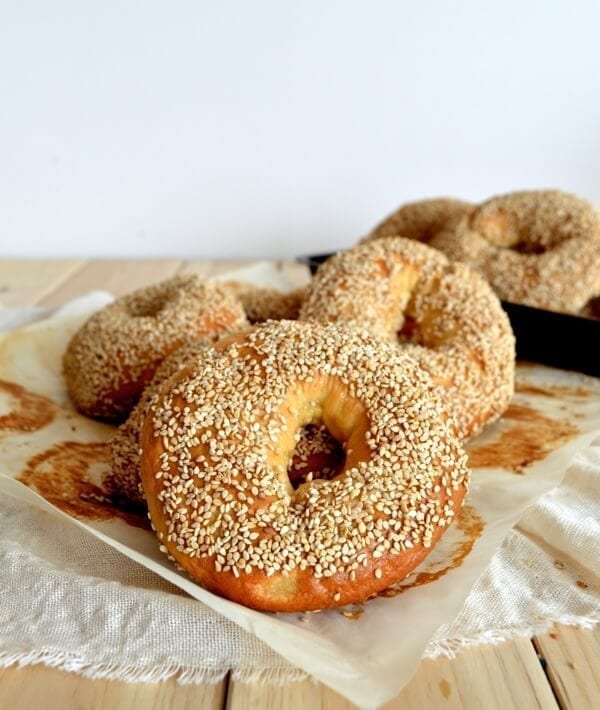 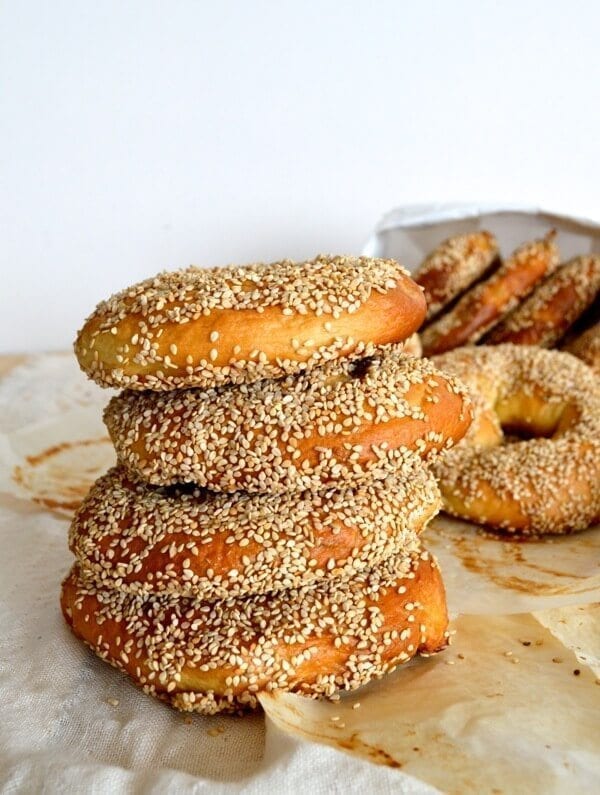 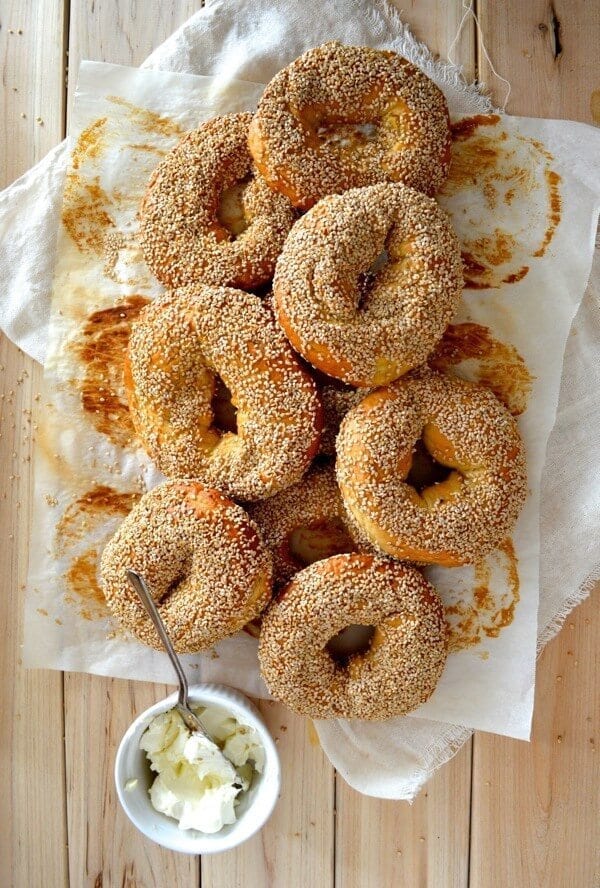 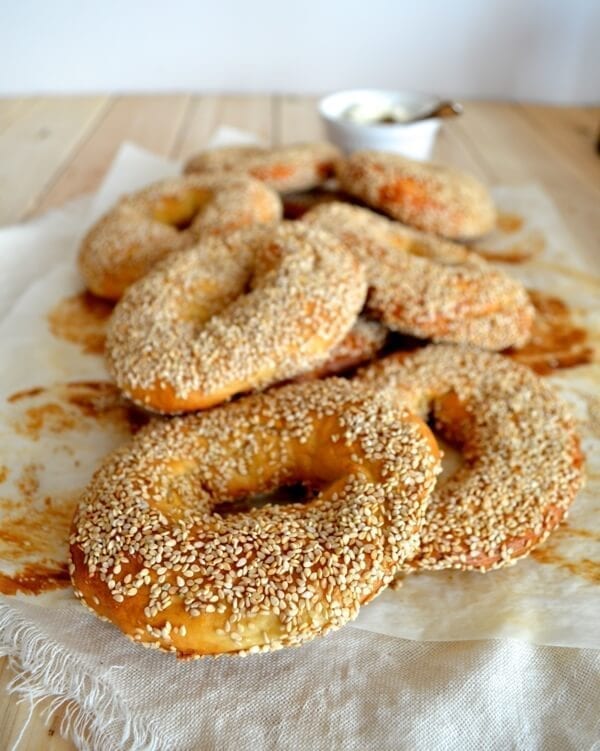 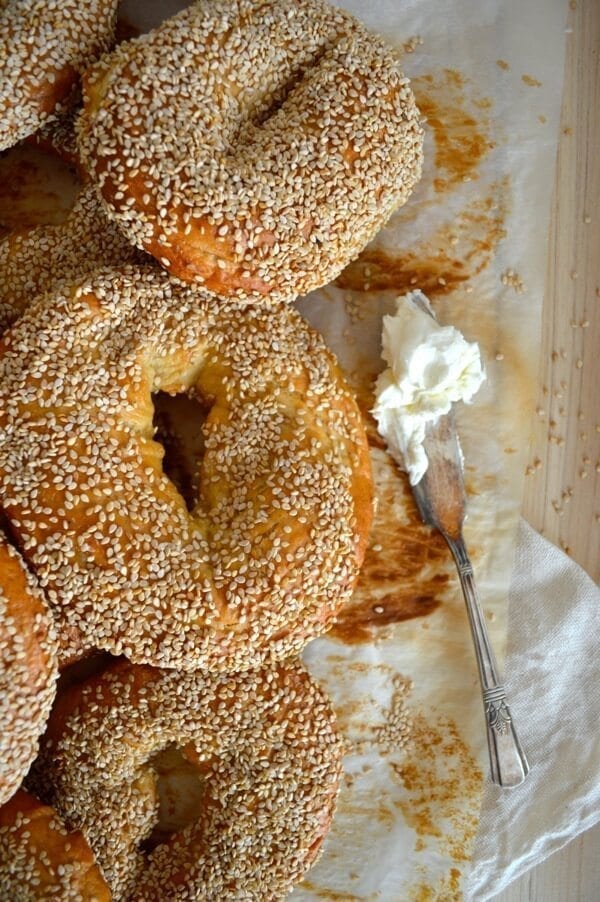