When I think about this Lotus Root and Pork Soup (莲藕排骨汤), a very happy childhood memory comes to mind. When I was little and living in Hubei, the lotus harvest was always such a festive event. The village would drain out some of the water in the town’s large lotus pond, causing the pond’s carp to jump and leap into the air in all the commotion.

The town’s men would all get in the water, using their hands and feet to feel around for lotus roots. When they found one, they’d pull it triumphantly out of the water, while the women and kids cheered them on. There were always many “ooh’s” and “ahh’s” when a particularly large lotus root would surface.

Around that time, when lotus roots were plentiful, I remember this special lotus root and pork soup being served often. It was a simple, nourishing, tasty soup that Hubei natives would love to treat their friends and special guests to, and it’s a recipe that I still love to make today.

I added seaweed to my version, but that’s totally optional. I do think it adds more flavor, and it’s also quite healthy! I also have a habit of adding dried goji berries to most of my soup recipes, which I learned from Bill’s mother. I once read somewhere that goji berries can improve your overall Qi (energy flow), and we all need that, right? A little boost couldn’t hurt! 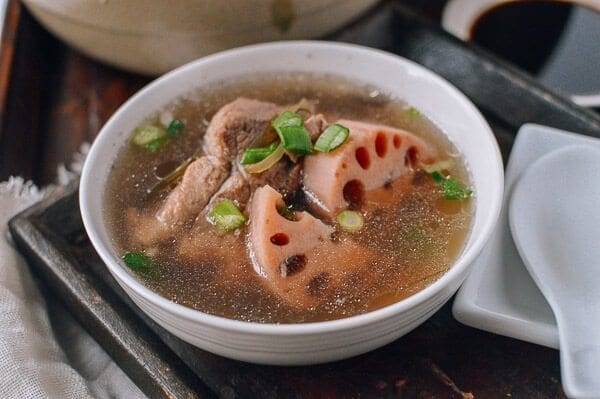 Ok, here are some important basics to know when making this lotus root soup recipe: 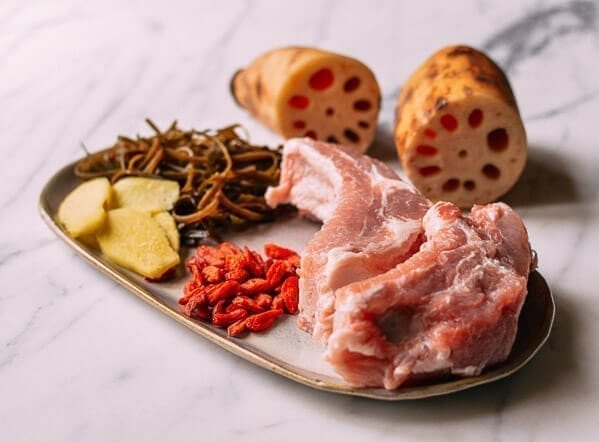 Soak the pork ribs or neck bones in cold water for an hour. Then rinse thoroughly, drain, and set aside. Boil a large pot of water, and add the pork bones to blanch. Once the water is boiling again, let it cook for 1 more minute. Turn off the heat, drain, and wash the pork bones clean. This process will give you a really clear (rather than cloudy) soup.

If you want to include re-hydrated seaweed, you can buy dried seaweed (kelp/kombu) or rehydrated seaweed at your Asian supermarket. Just try to avoid seaweed “knots,” as they tend to be a bit sandy. It takes at least 3 hours to rehydrate dried seaweed kelp, so you can soak it the night before. Once soaked, simply wash the seaweed in a basin of water until the water is completely clear. Then drain, and it’s ready to add to the pot.

Right before you’re ready to start the soup, peel the lotus root and cut it into large chunks (If you do this too early, the lotus root will oxidize, similar to a potato. So hold off until you’re about to start cooking). 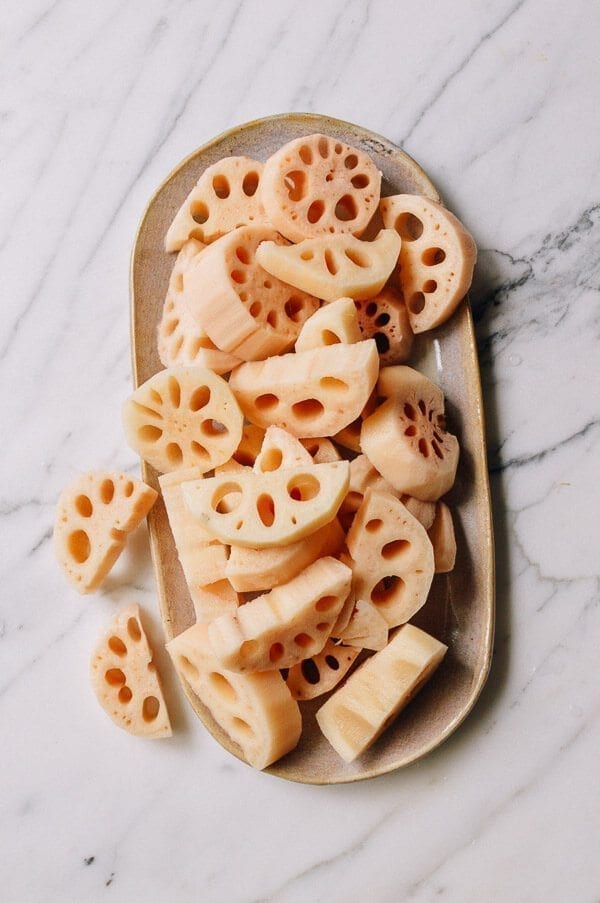 To start the lotus root soup, add all the prepared ingredients to a stock pot or earthen pot: the (blanched) pork, seaweed/kelp, lotus root, ginger, dried goji berries (if using), and cold water. 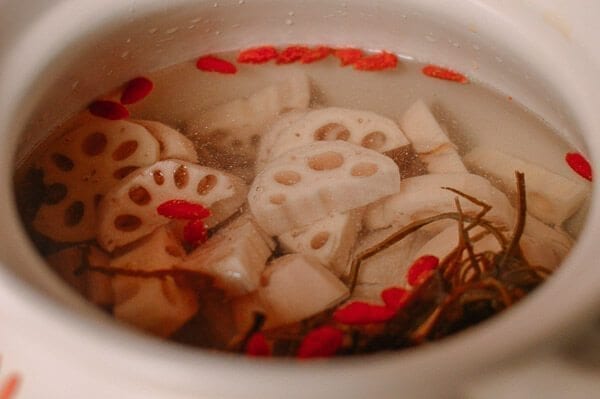 Bring it to boil, and then immediately turn it to down to a slow simmer. Cover and let it simmer for at least 4 hours…the longer the better. Reheating it the next day will make it even more flavorful. Add salt to taste, and serve with chopped scallion on top. 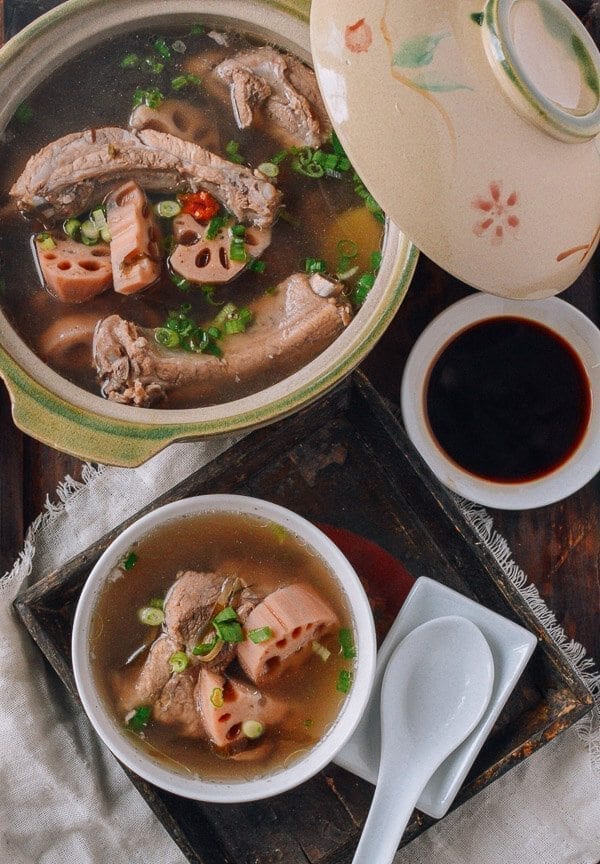 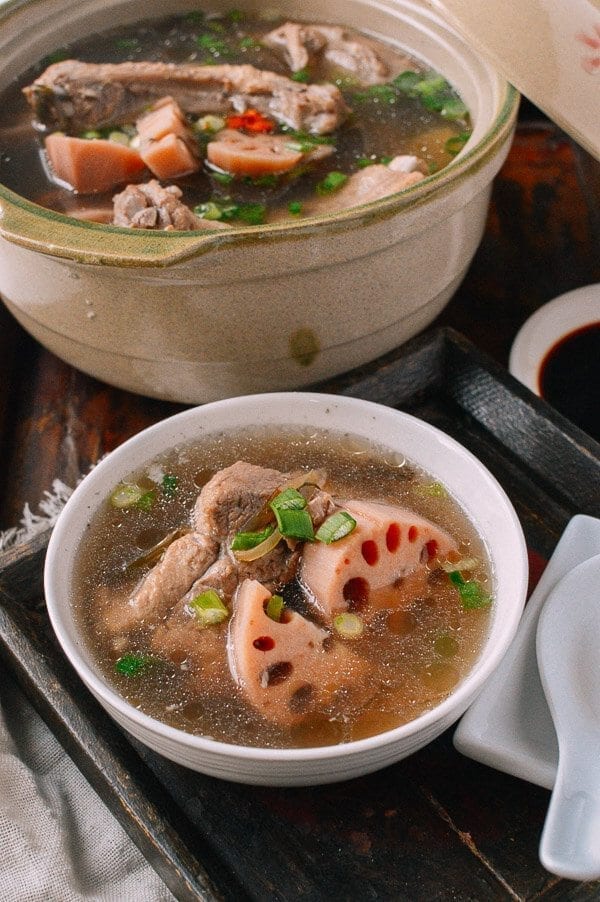 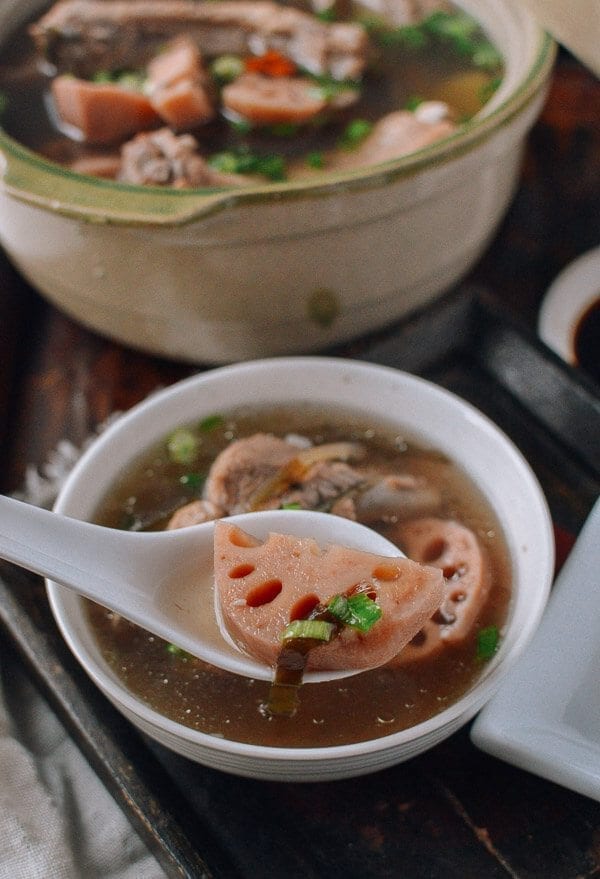