Here on the blog, we make a concerted effort to keep tabs and running lists on all of the dishes you request, from the familiar to the obscure.

We’ve gotten lots of requests for tasty dishes people have eaten at hole-in-the-wall places in Asia that folks are hoping to recreate at home. The impetus for this recipe was one such request, and we’re pretty happy about it!

It has been a long while since we’ve made a pan-fried noodle dish, but this recipe request came from a reader looking to step up his game and make the move from ordering his favorite Cantonese Hong Kong chow mein dishes at a restaurant to whipping them up at home.

Make Sure Your Wok is HOT

These Shrimp Chow Mein Noodles come together quickly once you prepare the fresh ingredients, but there’s one vital detail to keep in mind as you turn to your wok. To get it right at home, you’ll need a crazy hot wok to emulate that seared wok hay flavor everyone craves from their favorite Chinese restaurant.

Let us know if you’re successful in the comments! 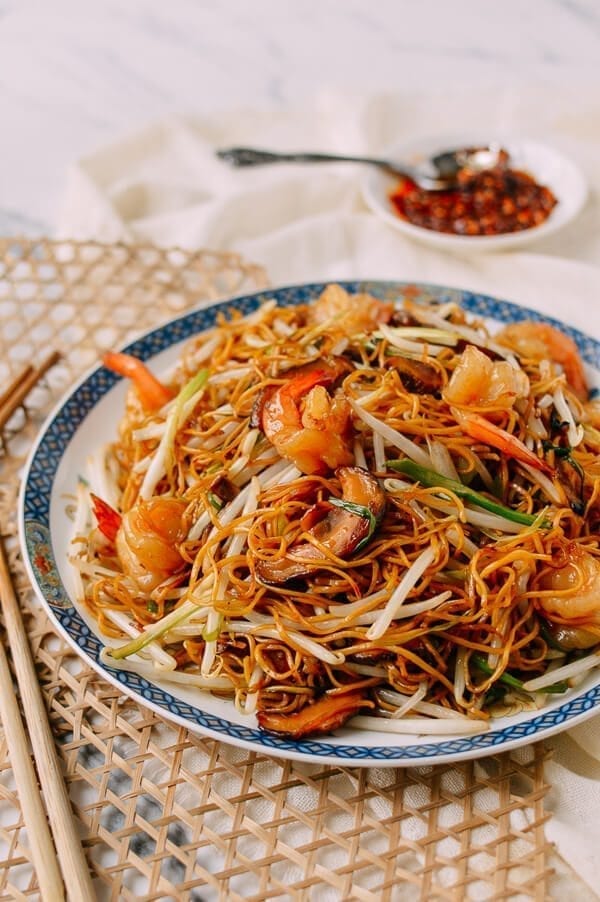 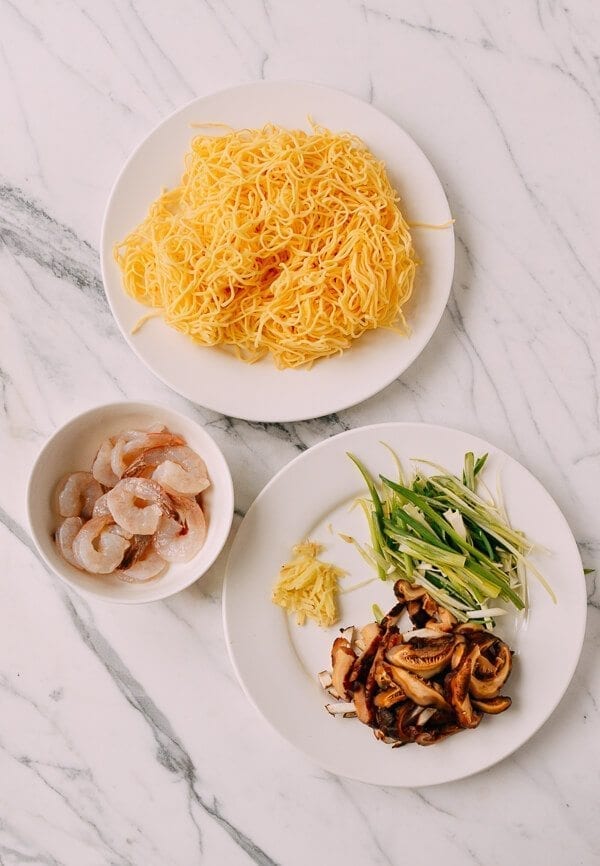 Bring 2 quarts of water to a boil, and cook the Hong Kong Style Egg Noodles for 1 minute. 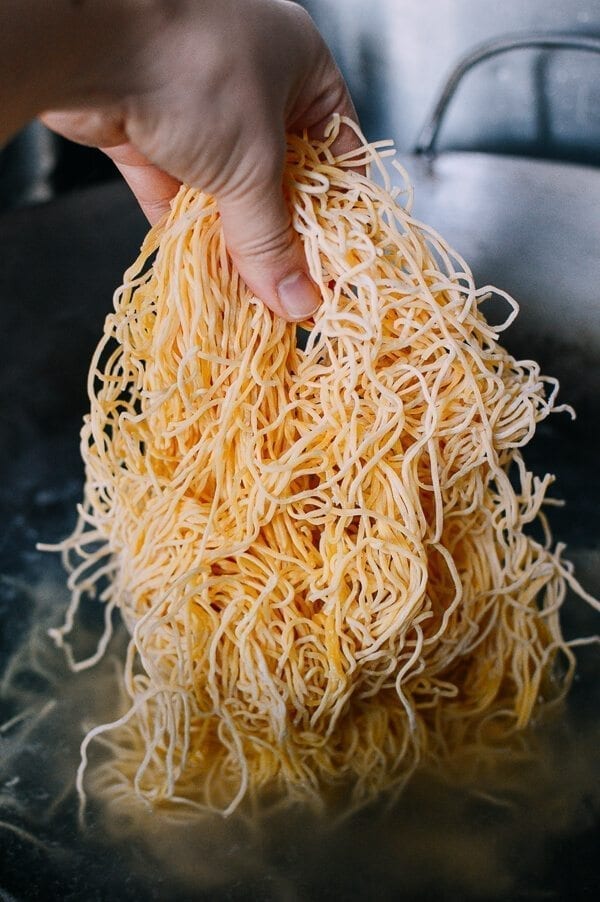 Drain, rinse in cold water, and spread the noodles out to drain further. 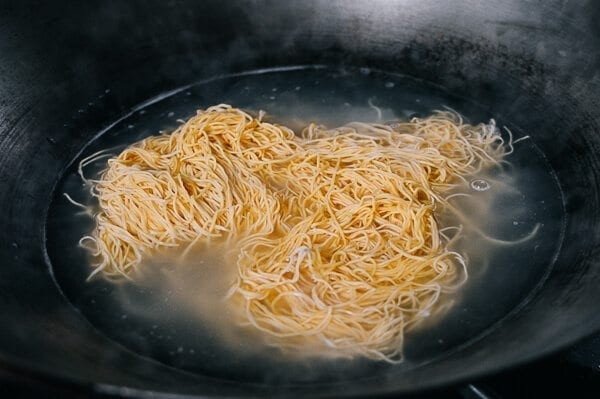 I recommend that you use uncooked, cleaned frozen shrimp. For this Shrimp Chow Mein recipe, I used uncooked shrimp, peeled off the shells, and left the tails on. The tails add nice flavor to the dish, but you can remove them if you prefer.

I also like to butterfly the shrimp: use a sharp knife and carefully cut about two thirds of the way into the backs of each shrimp to do this. Next, toss the shrimp in 2 teaspoons of oil, a pinch of salt, and 1 teaspoon of cornstarch. Set aside.

Rinse the mung bean sprouts in cold water. Keep them in cold water until you are ready to cook, and put them into a colander to drain just before you heat up the wok.

Heat your wok to medium high heat, and add 2 tablespoons of oil to coat the wok.

Spread the noodles in a thin, even layer, tilting the wok in a circular motion to distribute the oil and crisp the bottom layer of the noodles evenly. Let the noodles cook for 1 to 2 minutes, and adjust the heat as needed–lower if the noodles start to scorch or higher to lightly brown the noodles. The wok should not be smoking at this point!

Flip the noodles over, and add another tablespoon of oil around the perimeter of the wok to let the other “side” of the noodles crisp. Don’t stress if you can’t turn the noodles over in one shot, The goal here is just to get an even, light crispiness during this cooking stage.

Heat the wok to medium high, and add 1 tablespoon of oil to coat the wok. Stir-fry the Shiitake mushrooms for about a minute, then push the mushrooms to the side, and turn the heat down to medium. 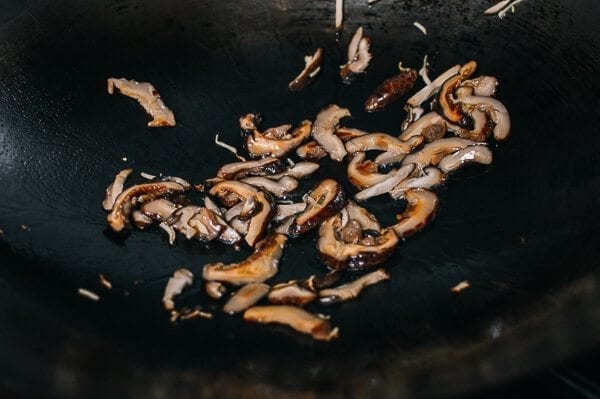 Add another ½ tablespoon of oil in the middle of the wok, and add the julienned ginger to the oil. 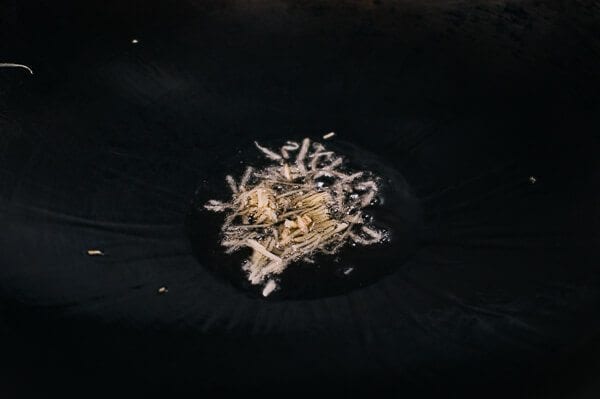 Let the ginger caramelize for about 15 seconds. Next, add the shrimp and stir-fry for 15 seconds. 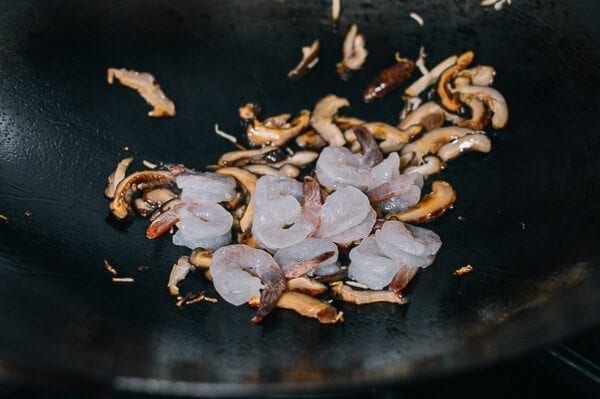 Turn the heat up to high, and add 1 teaspoon of Shaoxing wine. Stir-fry for another 45 seconds, until the shrimp are about 80% done. 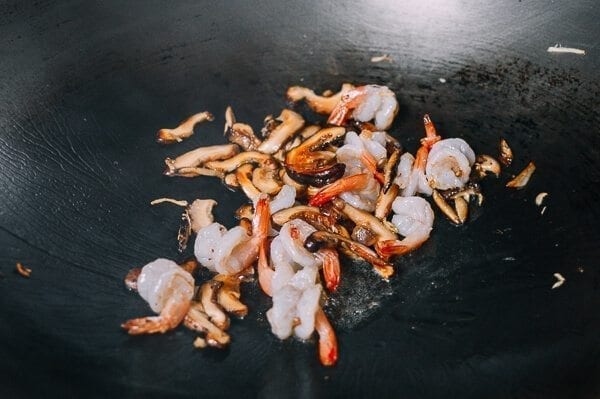 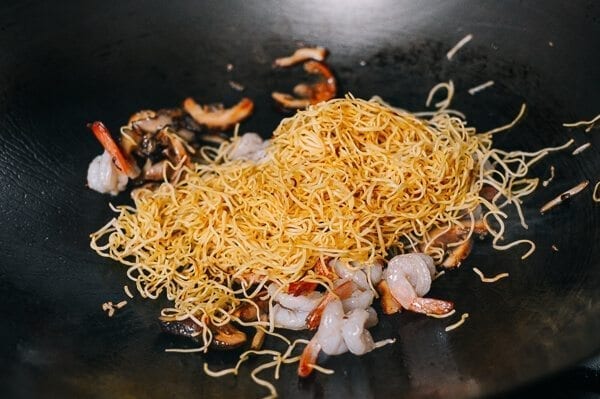 And pour the soy sauce mixture over the top. 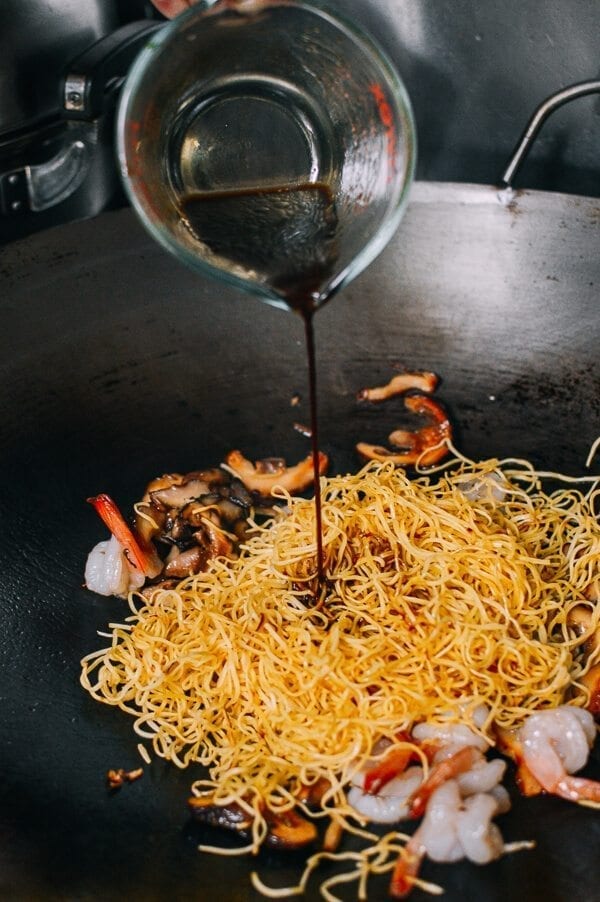 Quickly stir-fry the noodles with a lifting motion until the sauce is well-incorporated–about 30-45 seconds. 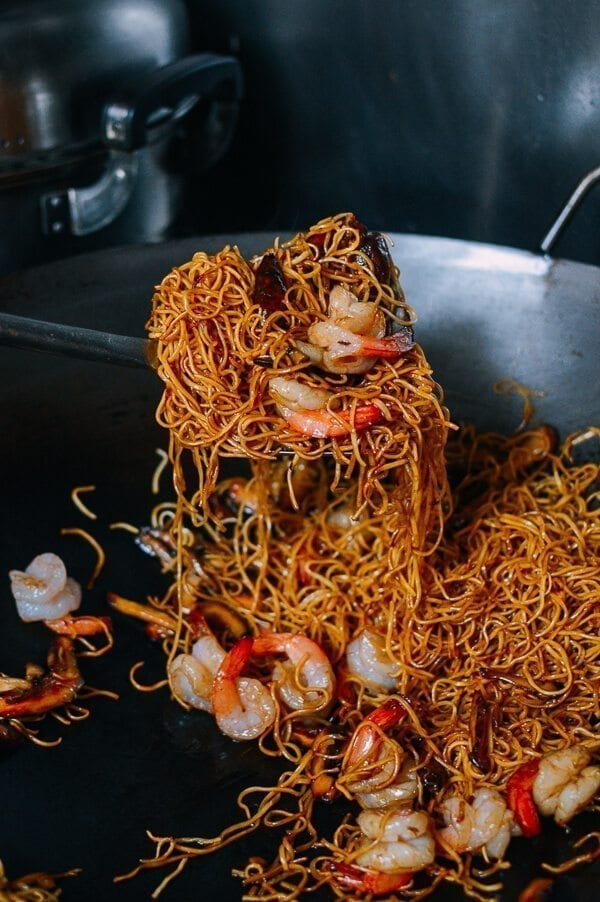 Toss in the scallions and the mung bean sprouts, and stir-fry everything for another minute. The wok should be at its hottest now to help you achieve that wok hay flavor. 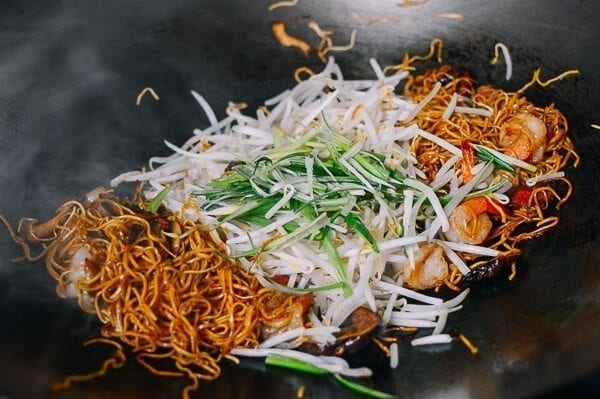 Transfer the noodles to a serving dish (before the scallions and bean sprouts wilt–they should still be somewhat fresh and crunchy). 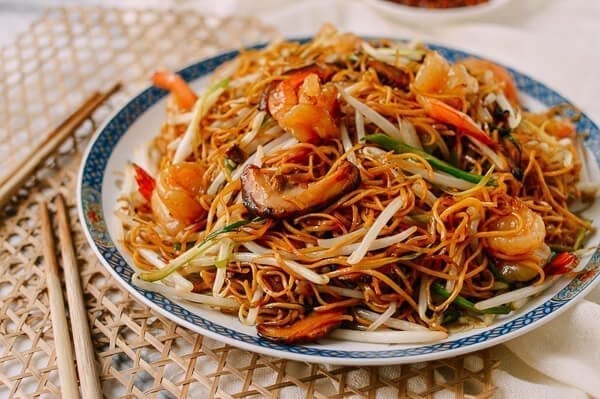 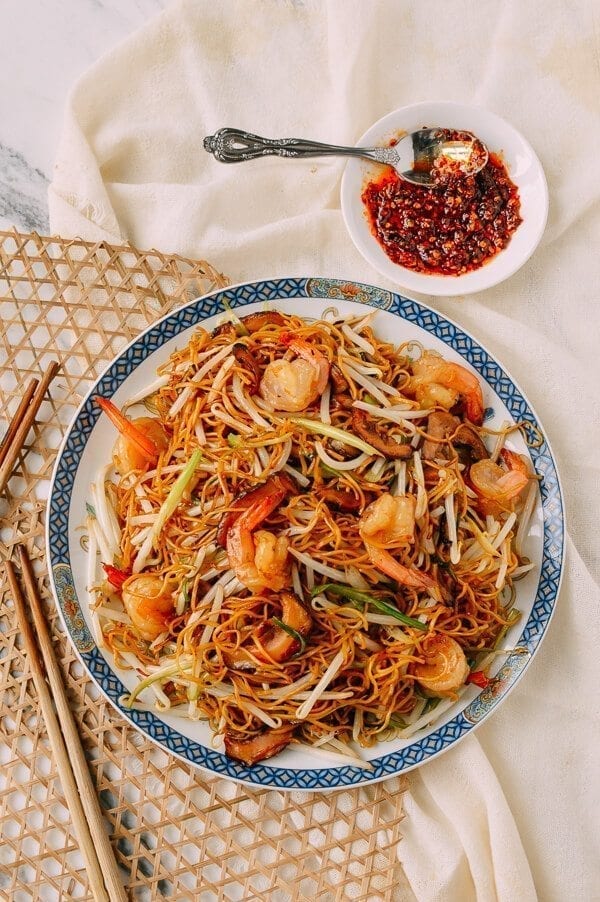 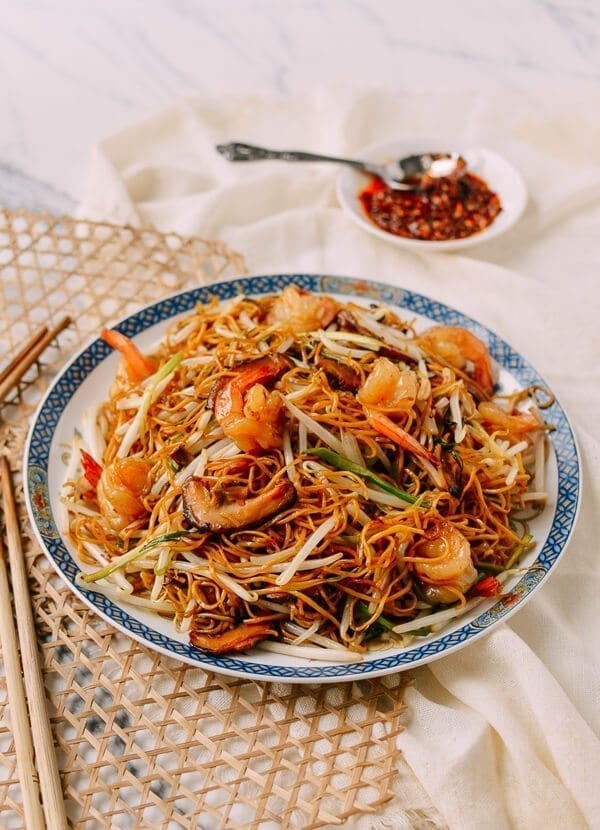 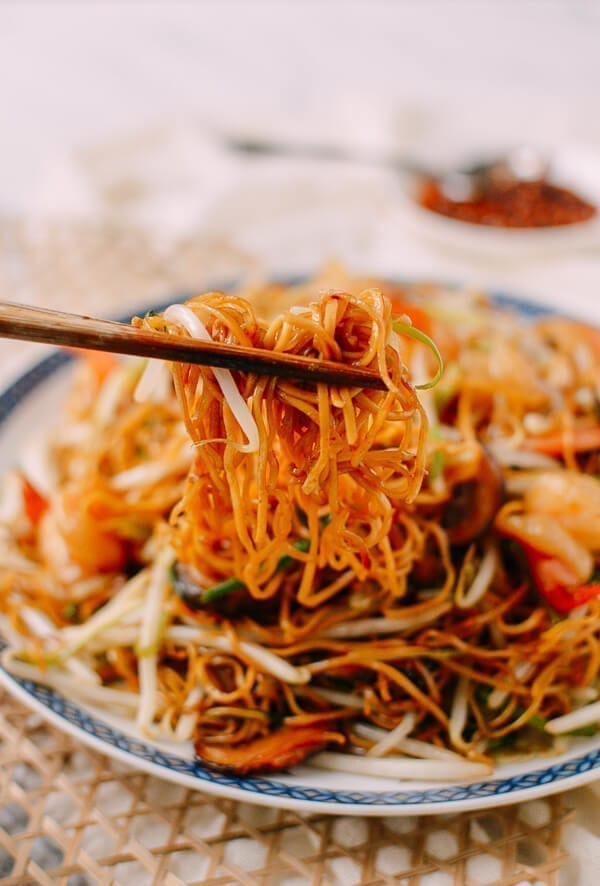 Chrysanthemum Tea Benefits (and How to Make It)