After all, cauliflower is the new kale.

I know this is technically not a new recipe, because how could a dish with healthy cauliflower combined with the popular General not already exist? Sounds improbable, but indeed some brave soul pioneered the combination.

Well, our story is that a good friend of mine invited us over to his house for an Indo-Chinese meal, and he drummed up excitement by saying I would be “pleasantly surprised.”

Now the other twist is that my buddy became a vegetarian years ago and moved on to become a full blown vegan. I wasn’t sure what to expect, and, truthfully, I was hoping he wasn’t going to serve me up alfalfa sprouts, beans, and salad.

I was pleasantly surprised when he served up delicious dishes of noodles, rice, curried eggplant and yes, General Tso’s cauliflower! He jokes around with us that we are obsessed with our blogging so I didn’t disappoint him when I said, “I’m going to blog that recipe!” Here it is, although slightly varied, since I decided not to blanch the cauliflower before frying, and instead of going with a shallow fry, I went for the deep fry.

We use cornstarch in the marinade to keep the cauliflower moist. Coating the florets in rice flour mixed with sesame seeds produces that crispy coating that everyone loves in General Tso’s Chicken! 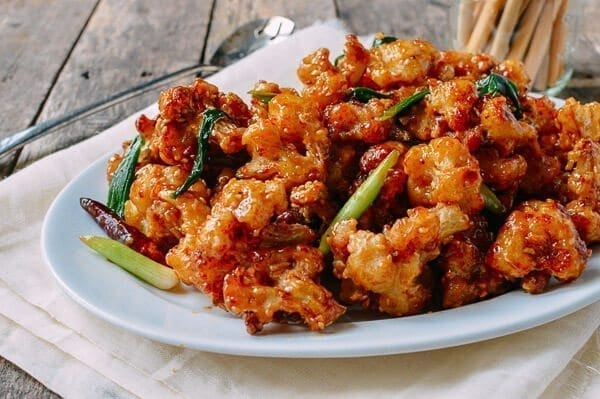 I know what some people will ask: “hey, Bill, can you bake this recipe? The answer is that I have no idea, but one of these days I will try. Hopefully one of our intrepid readers tries it first and lets the rest of us know! For now, the healthy spin of this General Tso’s cauliflower recipe is that it is a meatless meal to serve your vegetarian and vegan guests. And trust me, you won’t be disappointed either.

So for now, we’ll just call it vegan, healthy, and even gluten free, if you use Tamari instead of soy sauce. And when someone suggests a way to get a nice crispy cauliflower from baking it in the oven, I’ll update the post and add the official hot-button word, “skinny” and call it Skinny General Tso’s cauliflower!

Here you go for all of you vegans and vegetarians who want to get in on the General Tso action. Enjoy this one!

Cut the cauliflower into 1- to 2-inch florets. 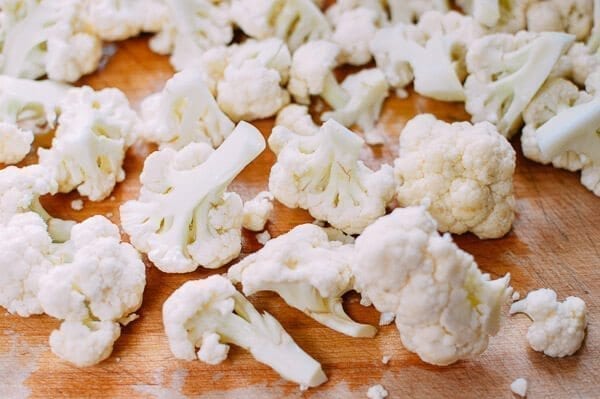 Mix the cornstarch, baking soda, salt, sesame oil, white pepper, water, and ¾ cup of rice flour in a large bowl until it forms a batter.

Toss in the cauliflower and fold together until the cauliflower is well coated. Sprinkle the remaining ¼ cup of rice flour over the cauliflower, and stir until everything is sticking to the cauliflower. There should be no more batter at the bottom of the bowl. If there is, just add a little bit more rice flour. If the batter looks dry or crumbly add a teaspoon or two of water.

Next, sprinkle the toasted sesame seeds evenly over the cauliflower. 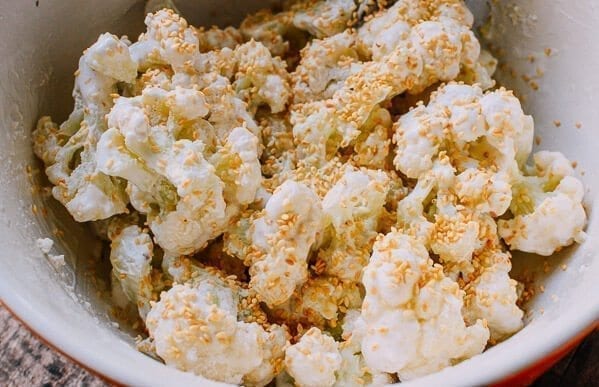 Heat the oil to 375 degrees in a cast iron pan or small pot. Fry the cauliflower in batches until light golden brown and crunchy (about 3 minutes), and transfer to a baking sheet lined with paper towels.

Heat 1 tablespoon oil in your wok over medium heat. Add the minced ginger, and let fry for 15 seconds. Add the garlic and dried red chili peppers. Stir for 10 seconds.

Add the cornstarch slurry gradually to the sauce while stirring constantly, and let simmer for 20 seconds. The sauce should be thick enough to coat a spoon.

Add the cauliflower and scallions, and toss the entire mixture until everything is well-coated in the sauce. 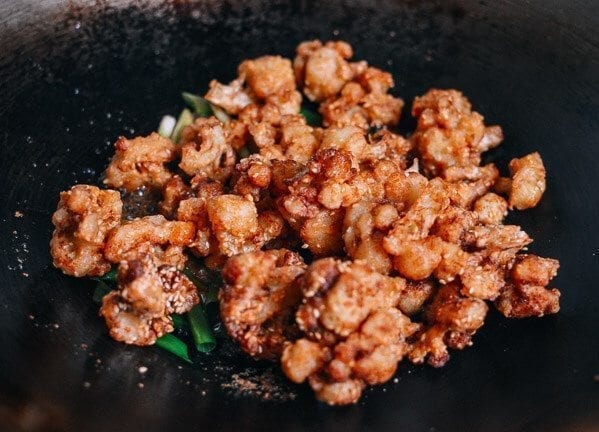 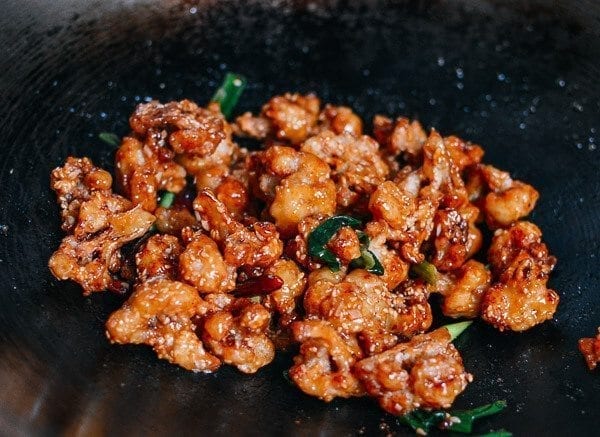 Serve your General Tso’s cauliflower with lots of rice! 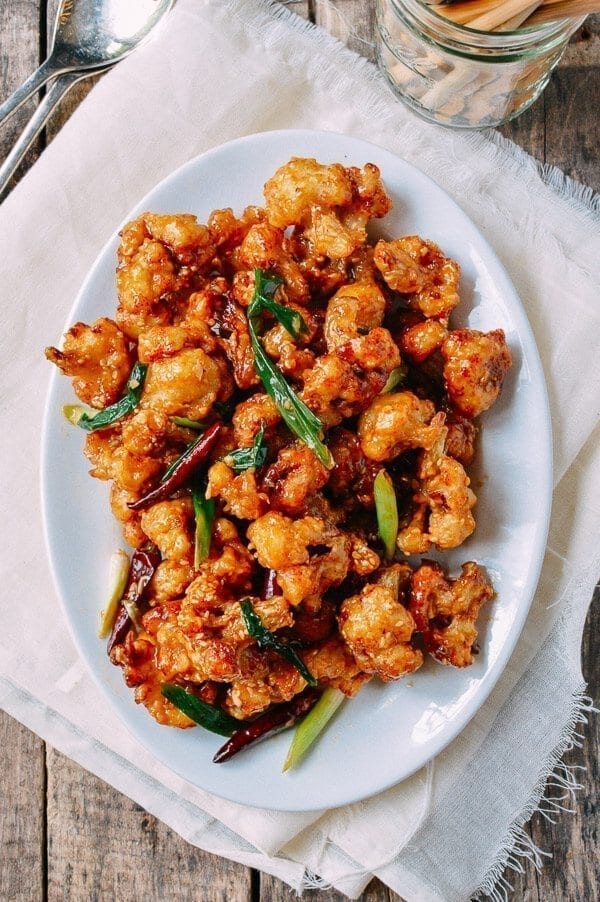 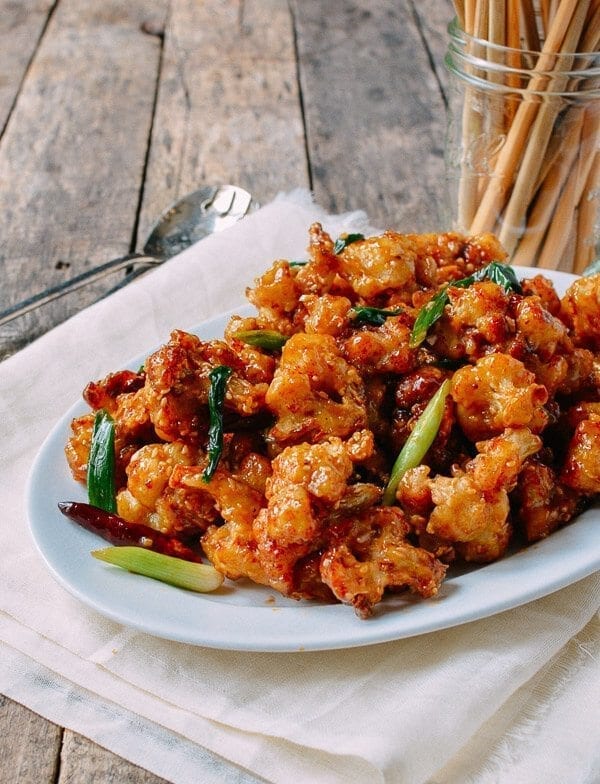