It’s that time of year again, guys. Thanksgiving, my FAVORITE holiday of the year, is in just 12 days and counting, and I’m ready to talk turkey. Five spice roast turkey, to be exact.

While our family has a tried and true roast turkey recipe that we’ve been making every Thanksgiving for as long as I can remember (my grandpa’s perfect-every-time roast turkey), this year, we’re changing things up a bit.

And it’s not just because we’ve already revealed the prized secret family recipe! I think it’s always a good idea to experiment with new flavors, even with a meal as traditional as Thanksgiving. Think of how different a Thanksgiving table can look from one family to the next.

Heck, my mom’s family used to just make a feast of Shanghainese dishes on Thanksgiving, with a roast turkey “on the side” as a little bit of an afterthought (albeit a necessary holiday addition). Because regardless of how you change up the sides or the desserts, the one common denominator at all of these Thanksgiving tables is a big roasted bird at the middle of the table.

This five spice roast turkey with giblet onion gravy is a *surprisingly traditional* non-traditional approach to the Thanksgiving bird. Chinese five spice powder, as it turns out, actually combines many of the spices that we love to use here in Western countries during the holidays––cinnamon, star anise, fennel, and cloves. (The fifth spice is Sichuan peppercorns, which gives the spice mix an even more complex flavor). 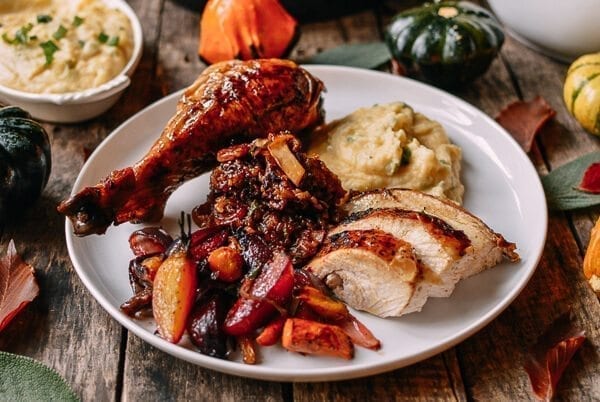 Based On a Weeknight Dinner

The idea for this recipe actually came from one of my favorite weeknight meals growing up: five spice baked chicken. Over the past summer and early fall, my dad and I worked out this marinade recipe, experimenting on a couple stunt turkeys and garnering weird looks from the local supermarket butcher department, who wasn’t sure why I was looking to roast a turkey in the middle of August.

We used five spice powder and sand ginger (the primary spice in my mom’s Hakka Salt Baked Chicken recipe), yielding an incredibly flavorful turkey. Its beautiful dark amber color can be attributed to the addition of soy sauce and dark soy sauce, as well as the basting process. 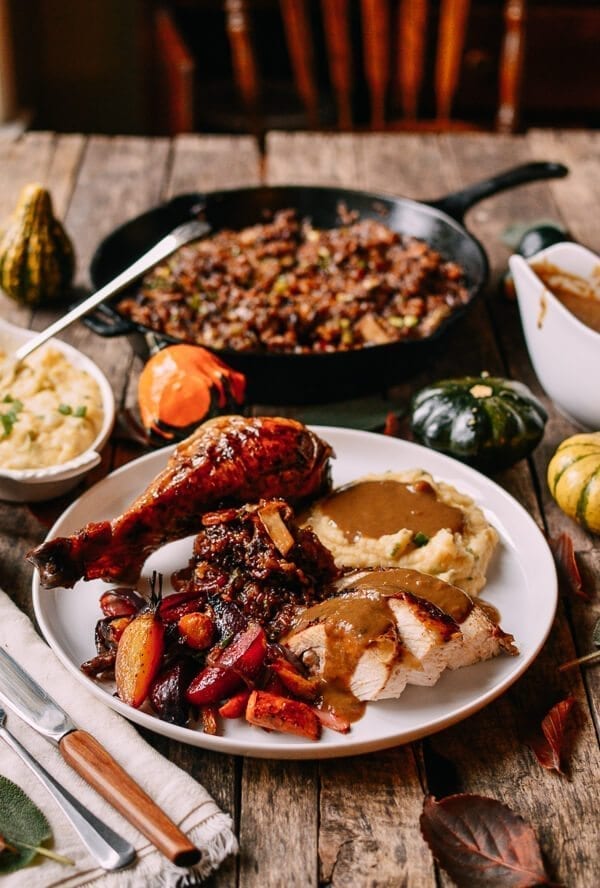 What About the Giblet Onion Gravy?

At the end of the day, though, it’s all about the gravy. I douse my entire plate in the stuff, and anxiously look over my dad’s shoulder as he makes it every year, worried that there will never be enough. It won’t surprise you to learn, then, that my favorite part of this recipe is the onion giblet gravy.

We’ve never really been a giblet gravy family, but now I don’t think I’ll make turkey gravy in any other way. Pulverizing the giblets and the caramelized onions from the roasting pan and adding them to the gravy mixture yields the most flavorful gravy I’ve ever tasted.

Suffice it to say, this Five Spice Roast Turkey is one heck of a Thanksgiving recipe. Over the next couple weeks, we’ll be posting more Thanksgiving recipes––side dishes that you see featured in the photos here. We’ve got Sticky Rice Stuffing, Miso Glazed Roasted Vegetables, and Scallion & Cheese Mashed Potatoes, as well as a Thanksgiving leftover recipe for after the dust clears. Stay tuned! 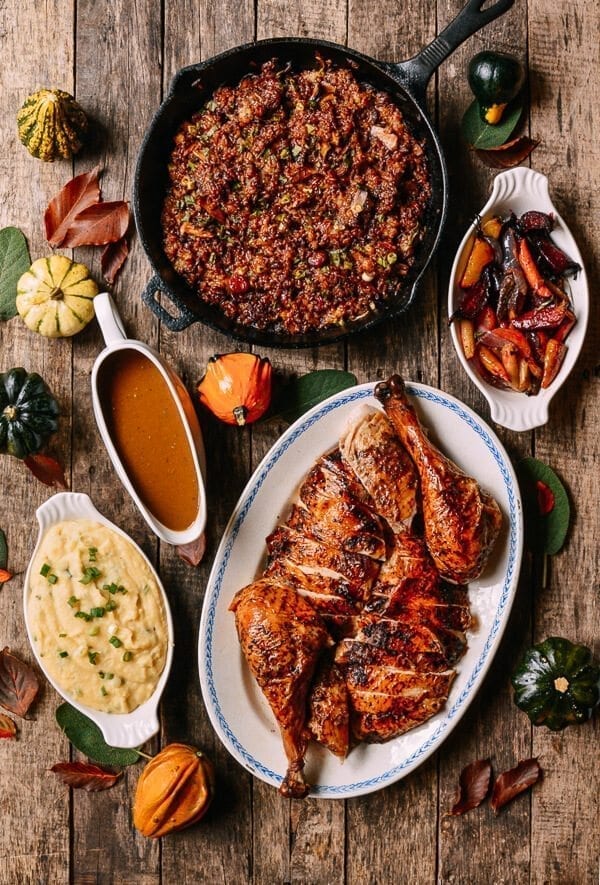 Ok, on to the five spice roast turkey recipe.

NOTE: if you’re using a kosher turkey for Thanksgiving this year, you’ll want to reduce the salt in the recipe by about 2 teaspoons, since kosher turkeys are salted during processing.

2-3 days before roasting, start thawing your turkey in the refrigerator. On the day before you plan to roast it, make the marinade by combining the garlic, salt, soy sauce, dark soy sauce, Shaoxing wine, sugar, white pepper, five spice powder, sand ginger powder (or galangal powder), and sesame oil in the food processor. Pulse until you can’t see any more big chunks of garlic in the mixture.

Spread out the onion wedges in the bottom of your roasting pan. The onions will serve as the “rack” that the turkey will sit on.

Remove the turkey from the package. Remove the neck and the giblets from the turkey cavity and give the bird a good rinse with cold water. Pat it thoroughly dry with paper towels, and lay it breast side down in the pan. Spread half of your marinade all over the bottom side of the turkey, making sure you cover every surface and crevice (including the cavity).

Flip the bird over so it’s laying breast side up, and spread the other half of the marinade over this side of the turkey. Also spread some of the marinade on the neck and giblets, and add those to the pan as well.

Cover the roasting pan tightly with plastic and allow the turkey to marinate breast side up overnight.

The next day, allow the turkey to sit out on the counter at room temperature for about 2-4 hours to warm up (you don’t want to transfer the turkey directly from the refrigerator to the oven, which may result in uneven cooking). Tie the legs together with kitchen string.

Roast the turkey for another 75-90 minutes, basting once or twice, until a meat thermometer inserted into the thigh reads 165-170 degrees F and any juices run clear (not pink). During this time, twist the turkey pan 180 degrees if the turkey is cooking unevenly (ovens vary and some do tend to have hot spots). If the top of the turkey starts to get too dark, place a large piece of foil loosely over the top of the turkey to protect it from burning. 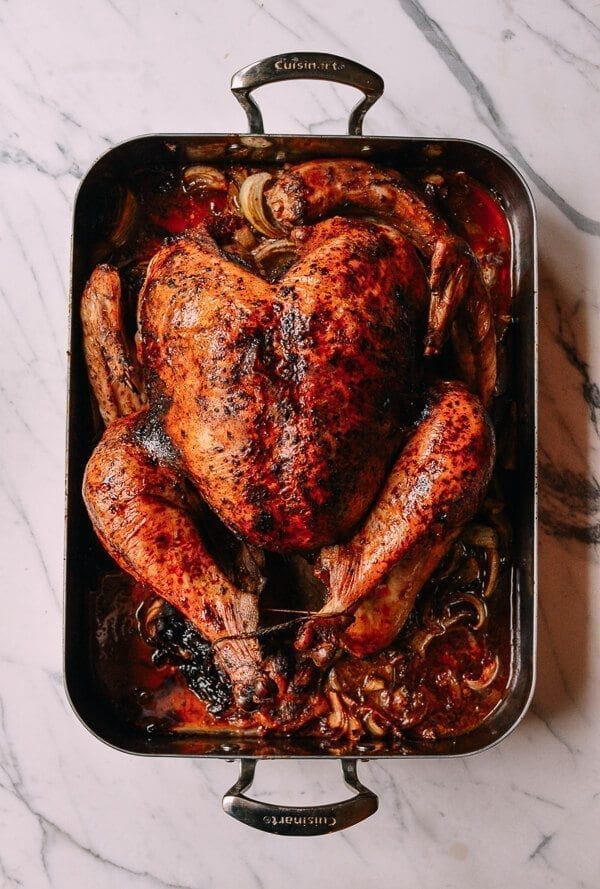 Remove the turkey from the oven and let it rest for 15 minutes, covered loosely with foil. After this initial resting time, transfer the turkey to a cutting board or serving plate, keeping it tented with the foil. 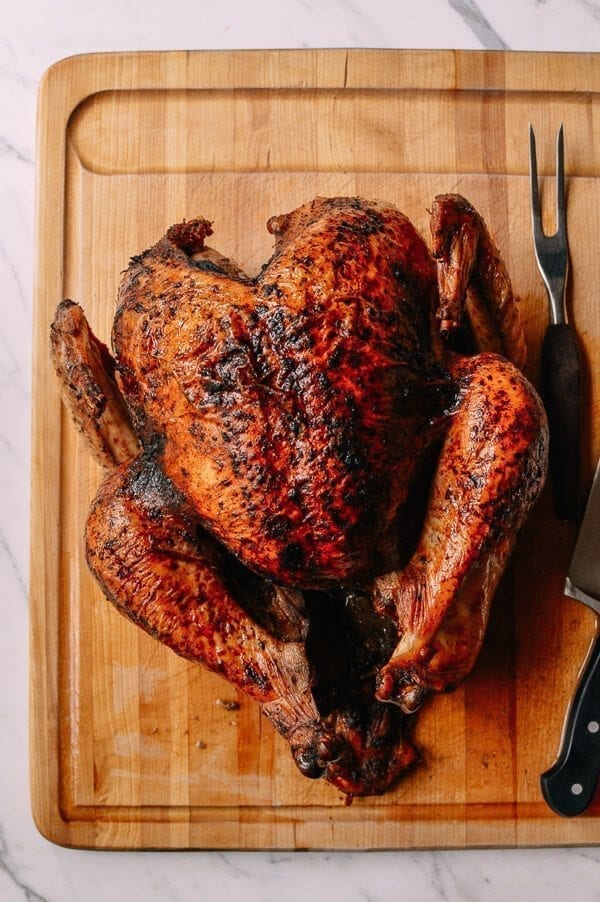 Using a slotted spoon, remove any burnt bits or impurities from the roasting pan. Next, scoop out the onions and giblets, and transfer to a blender. 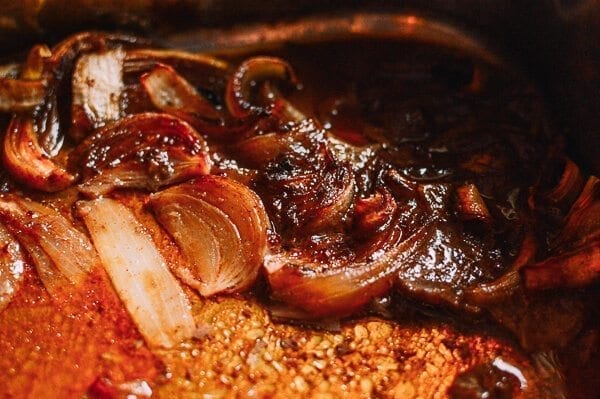 If you don’t like giblets, you can alternatively shred the neck meat and add that to the blender (this is what’s pictured below), but this is totally optional if you want to serve the neck along with the turkey instead! Pour the remaining pan juices and fat into a large gravy separator and set aside. 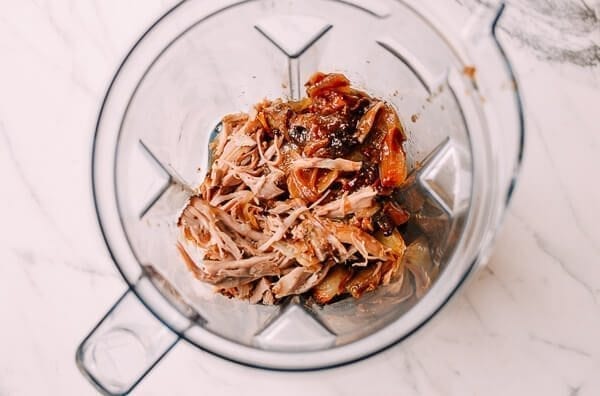 It’s time to make the gravy. Blend the onions and giblets (or neck meat, if using) until smooth. In a saucepan over medium heat, add the turkey fat. You should have about a quarter cup of fat. If not, add enough butter to approximate ¼ cup of fat.

Whisk in ¼ cup all purpose flour to form a roux, and cook for about 3 minutes, whisking constantly. Turn the heat down if necessary to prevent burning. 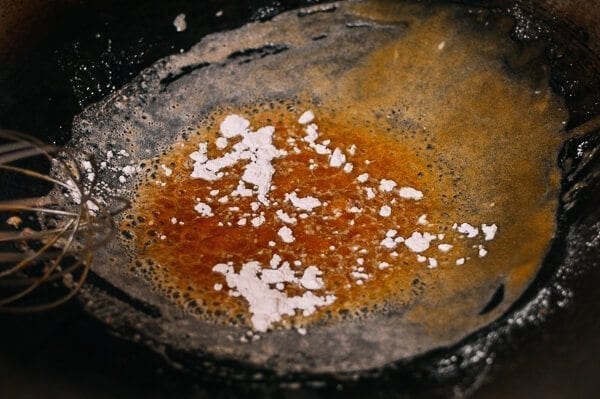 Whisk in the paprika, the contents of the blender, and the juices from the roasting pan. Gravy isn’t an exact science. You’ll have to adjust according to how thick or thin you like your gravy! If the gravy still looks too thick, add more chicken stock until it reaches your desired consistency. Continue to simmer the gravy for about 2 minutes, whisking constantly.

At this point, add the dark soy sauce. This ingredient is mostly for color but also for extra umami flavor––I add as much as I need to get the rich color I’m looking for. Season the gravy with salt and pepper to taste. 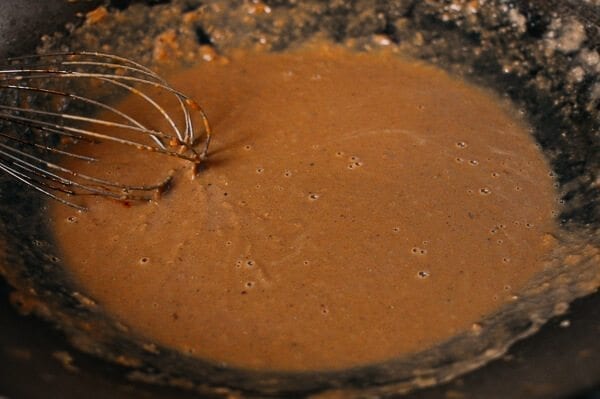 By now, your turkey should be fully rested. Carve your Five Spice Roast Turkey and serve with the gravy on the side. 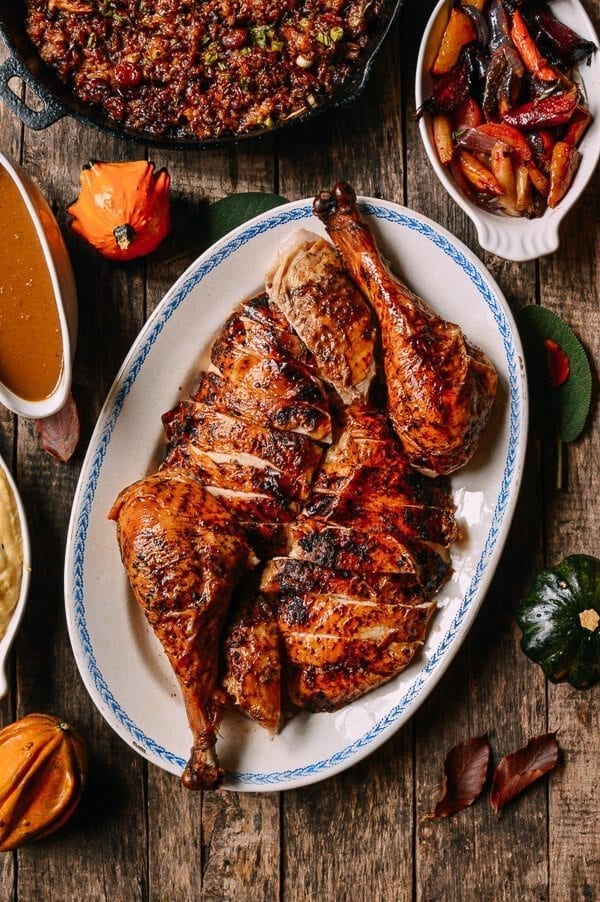 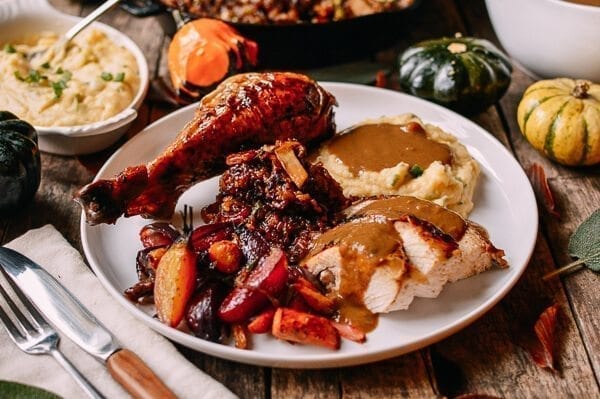 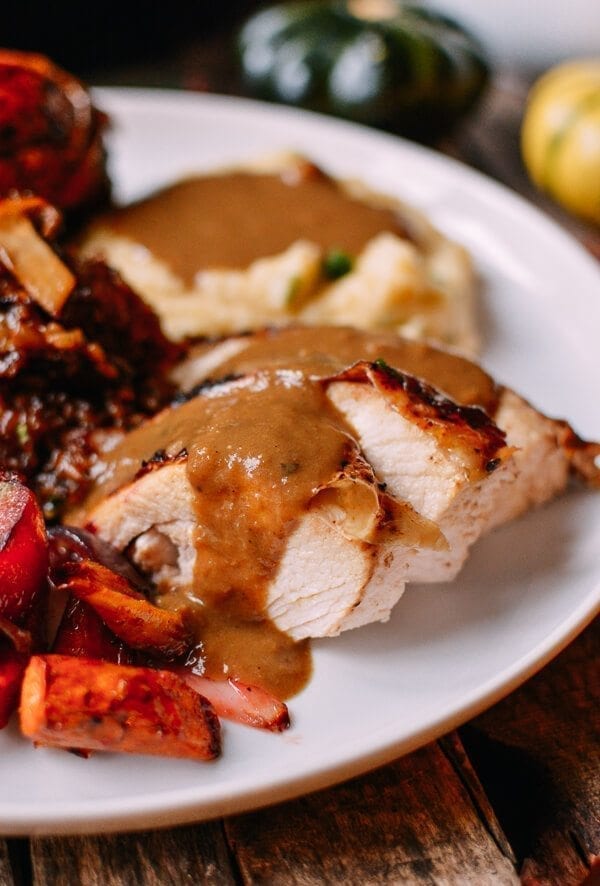 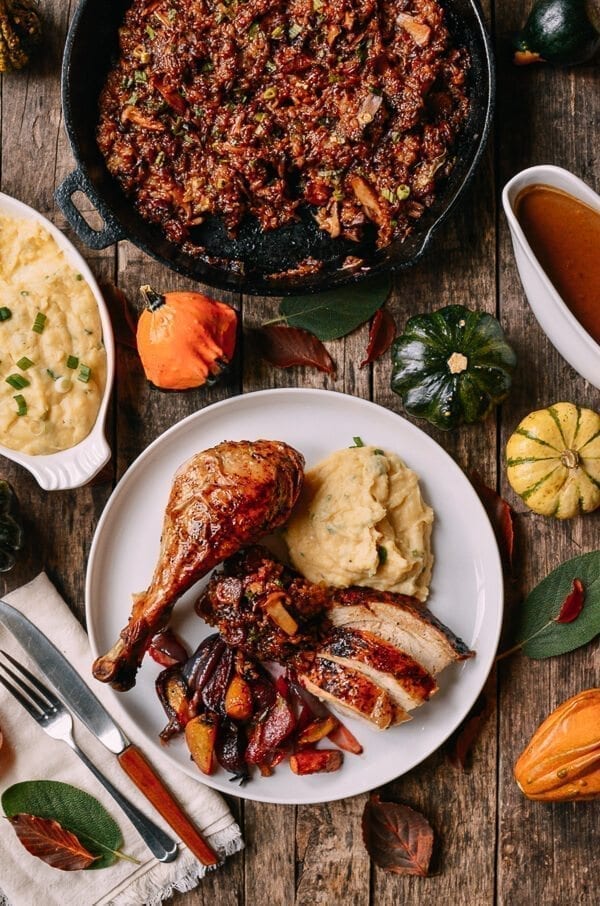