These Curry Lime Chicken Phyllo Rolls were adapted from Ina Garten’s Crab Strudel recipe, which is awesome. But I’m not an established TV personality who regularly throws around phrases like “good olive oil” and “lunch in East Hampton,” so lump crab meat isn’t something that I’m shelling out money for very often. That’s why I decided to make a version with chicken.

I also kind of shy away from calling this recipe a “strudel,” because whenever I think of strudel, I’m seeing cinnamon, apples, and powdered sugar. Maybe that makes me a close-minded, ornery traditionalist. But oh well.

You can make these as an awesome appetizer, or, you know…a nice light snack for one when you’re home alone. hehe…heh…..heh.

I added onions to the recipe as well, because whenever we make curry chicken in our house, the best part about it is the caramelized onion that’s almost melted into the sauce. And I used cilantro rather than parsley, because, well…it’s only right. It has a much punchier flavor with the lime, and I think it goes better with the curry. 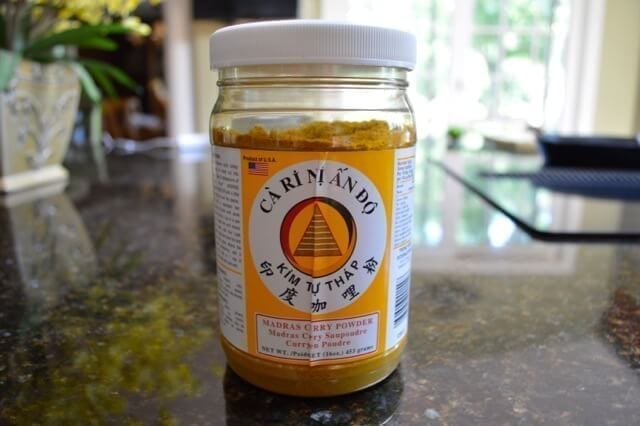 A couple more points to consider…

Yeah…so I just ate an unreasonable number of these, and they were REALLY good. Let’s just jump right in, shall we?

Heat the olive oil in a pan over medium heat and add the sliced onion. Cook for 5 minutes until the onions begin to soften. 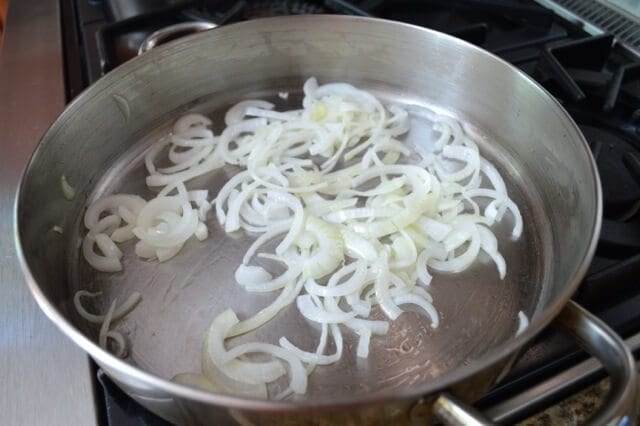 Then add the scallions and garlic and continue to cook until everything gets slightly golden, about 8 more minutes. It’s oniony garlicky goodness in a pan. 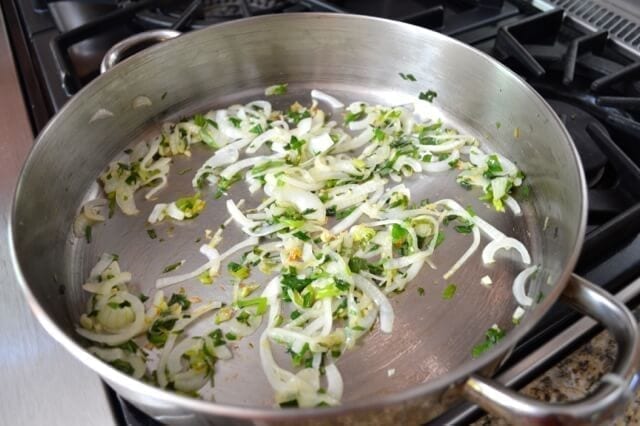 Lower the heat, and add the curry powder. 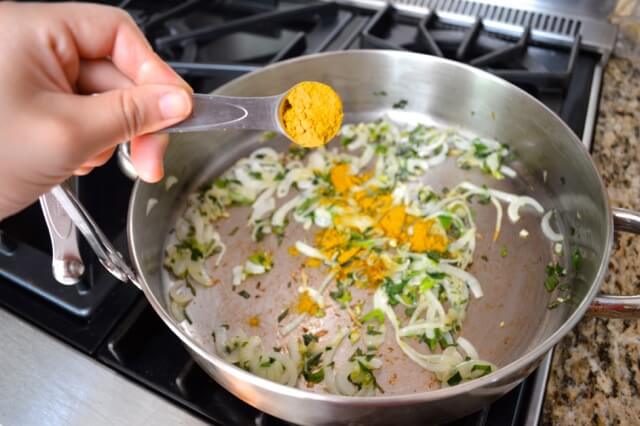 Give it a stir and cook for another 2-3 minutes. Turn the heat off. 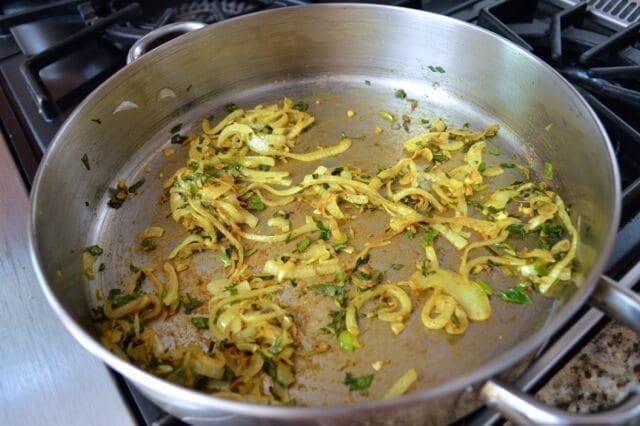 Add the shredded chicken to the scallion and onion mixture… 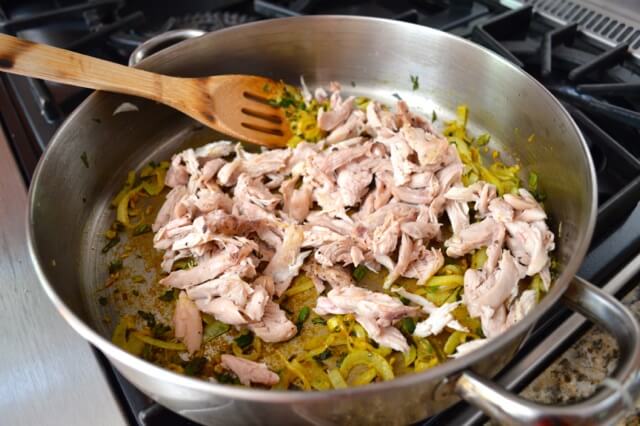 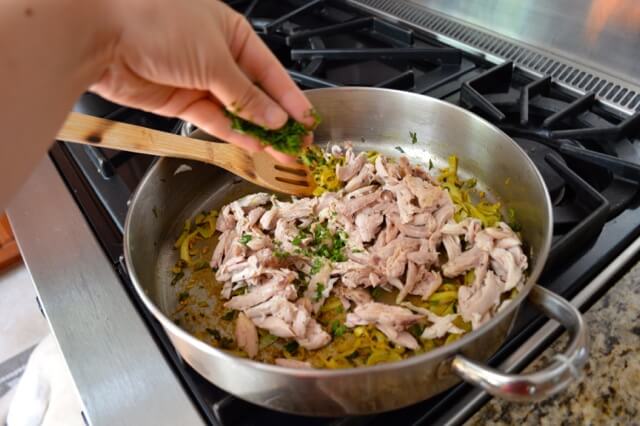 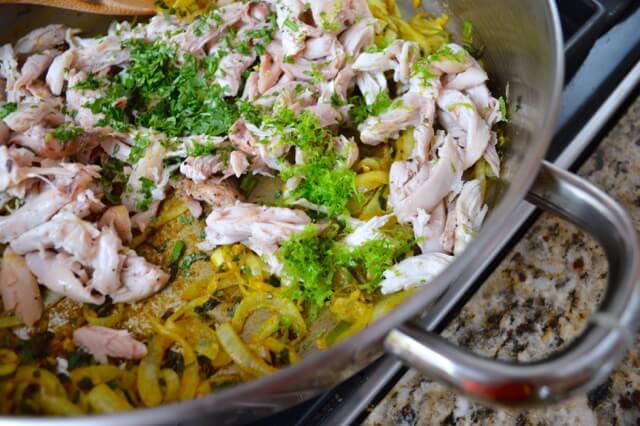 And the lime juice. 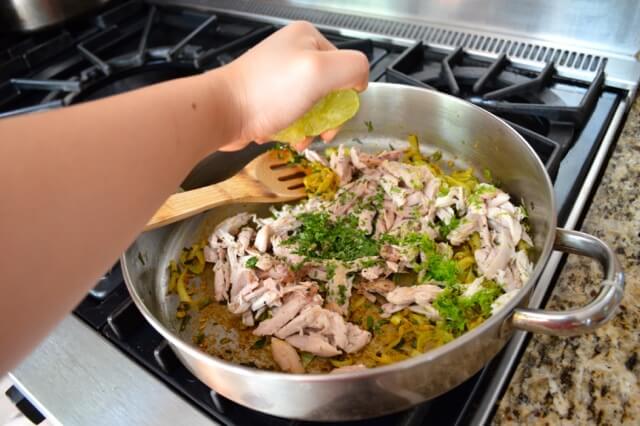 Add salt and pepper to taste and stir it all up. 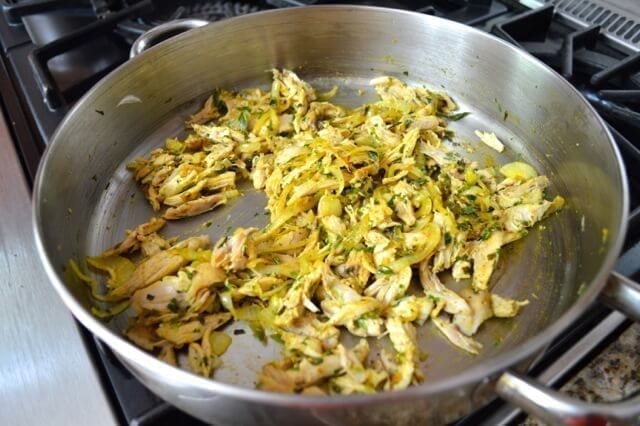 Heat your oven to 400 degrees. Prepare a sheet pan with a layer of nonstick foil or parchment paper, and melt 4 tablespoons butter. Set it aside along with the breadcrumbs. Get a pastry brush out. 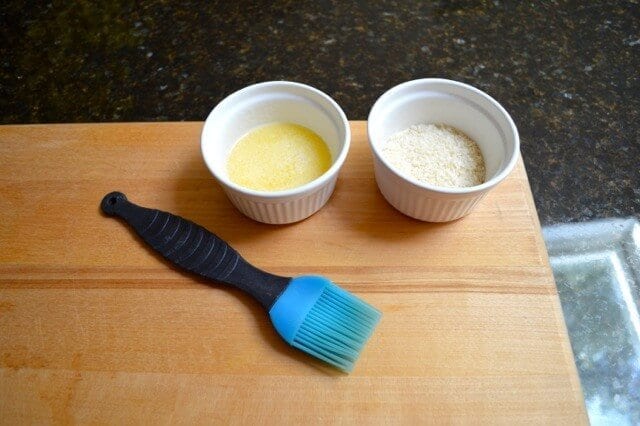 Take your phyllo dough and lay out one sheet on a clean surface. Brush it with a little melted butter and sprinkle lightly with breadcrumbs. The breadcrumbs will create a bit of separation between each layer of phyllo. Translation: These little rolled up delights are CRISPY. Crispy and delicious. 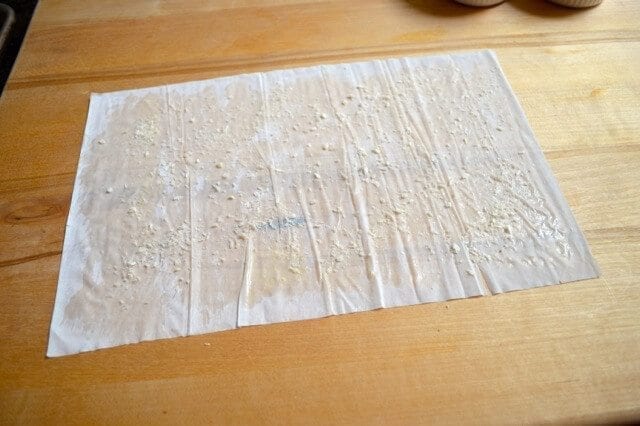 Put another layer of phyllo dough on top, and repeat the butter and breadcrumb process again and again until you have 4 layers. Spoon half of the curry chicken mixture along one edge (lengthwise) of the phyllo. 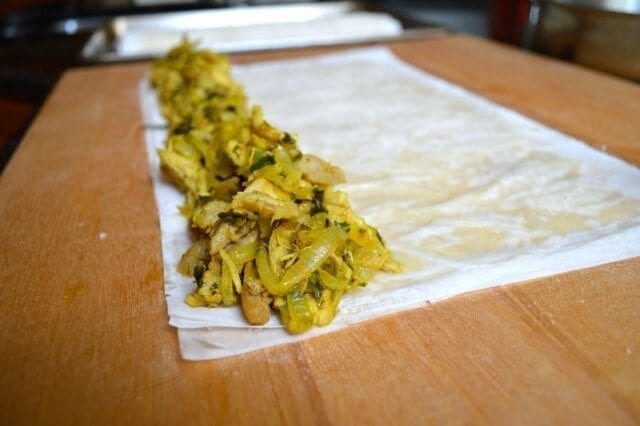 Roll it up tightly and set the roll seam side down on the baking sheet. Repeat the process with the rest of the phyllo and chicken mixture to make a second roll. 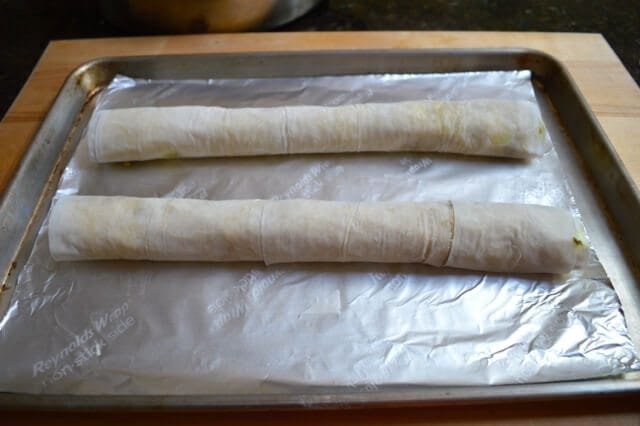 Brush each roll with the rest of the melted butter… 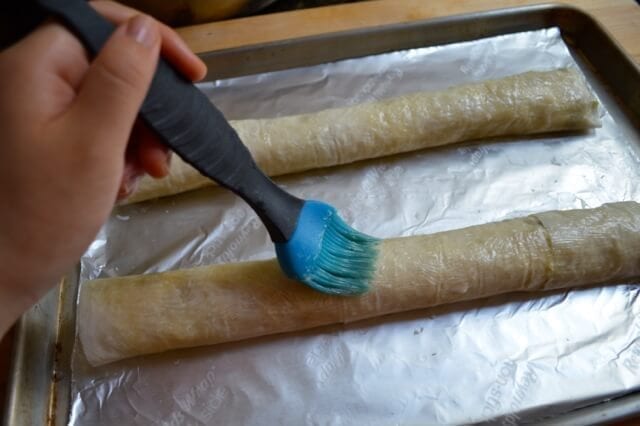 And score both rolls diagonally into 1 inch pieces with a serrated knife. You want to cut them about ¾ of the way down, without cutting all the way through. This will keep them all together while also making it easier to cut after they’re baked. 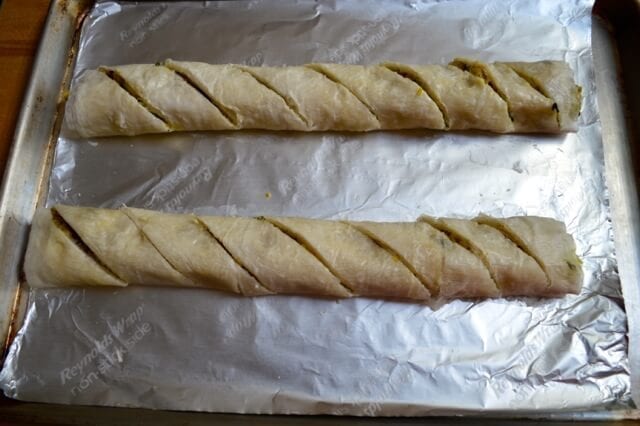 Bake for a blissfully brief 12 minutes. 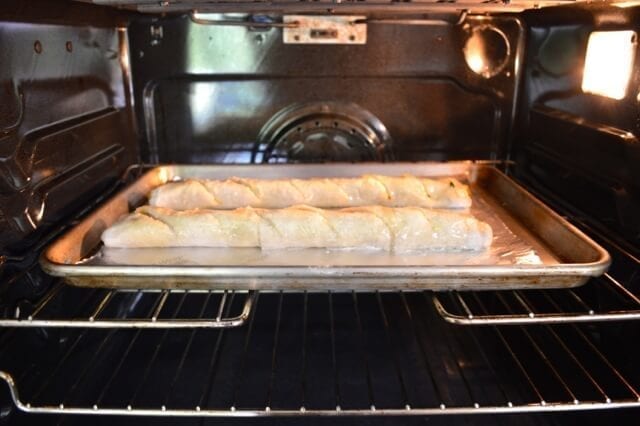 …until the tops are golden brown. 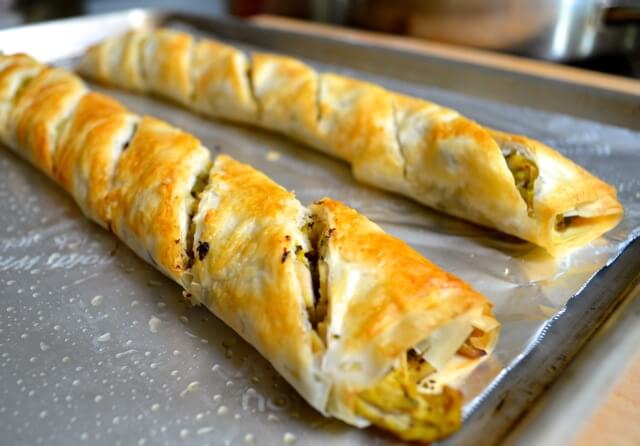 Slice them the rest of the way through and serve! Feel free to throw some chopped scallions on there if you’re feeling fancy. Enjoy it, and maybe shoot us a comment below so I know I’m not just talking to myself here. You’ll really be helping my self esteem if you do! That is all. 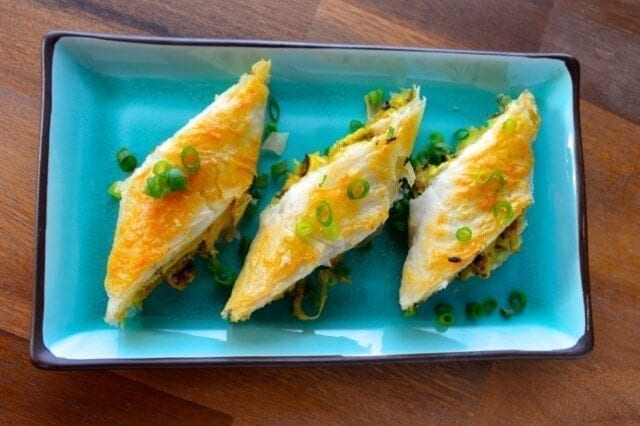 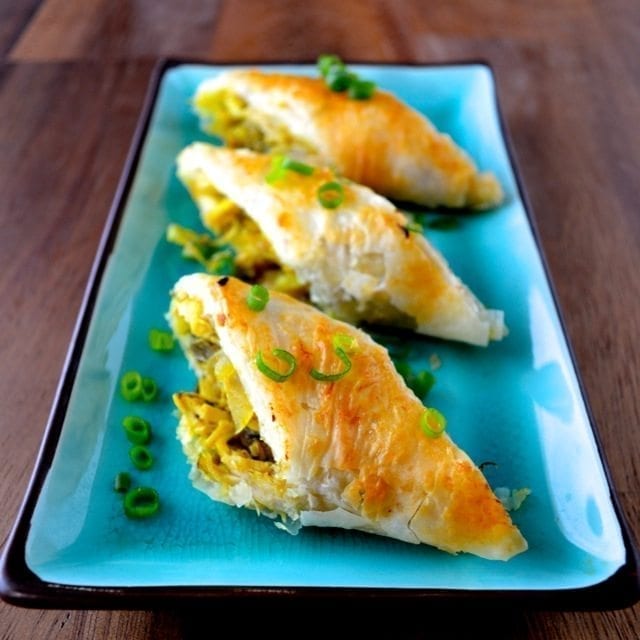