This Cantonese Herb Pork Bone Soup, (Ching Po Leung in Cantonese or Qing Bu Liang in Mandarin – 清补凉猪骨汤), is probably my favorite Chinese soup. We make it quite often in our family, especially during the cold winter months.

Among the many ingredients needed to make a wholesome and nutritious soup, this soup uses barley, one of my favorite grains. In fact, this “Ching Po Leung” (sometimes also spelled “Ching Bo Leung” soup) is made from all dried and preserved ingredients, with the exception of the fresh pork bones used for the stock.

If you Google search Ching Po Leung, you’ll find that there is a cold, sweet dessert version of this soup. But the version I’m more familiar with—and the one we’re sharing today—is the savory version.

Growing up, I always enjoyed my mom and dad’s Chinese soups, and there were quite a few different varieties. Some were very basic, like chicken feet soup with peanuts, and others were more complex like this Ching Po Leung soup.

I think both of my parents were equally skilled at making soups and tonics. I remember frequently hearing them discuss how to make different soups and how each of them learned the recipes from elders in their respective families.

Learning from My Parents

Making a good soup always seemed a bit complicated, so it’s no surprise that as a young kid, it’s one of the foods that I paid the least attention to while it was being prepared by my parents in the kitchen.

Luckily, this Ching Po Leung soup was made quite often throughout my childhood, so repetition definitely helped me remember how it was made and, most importantly, how it should taste!

Like many Cantonese soups, Ching Po Leung is made with pork bones, which produce a rich stock. But one of the best parts of the soup is the meat on the pork bones, which is incredibly fragrant and delicious after hours of simmering. The meaty pork bones are so good that we always put extra in the soup and eat them with soy sauce on the side. 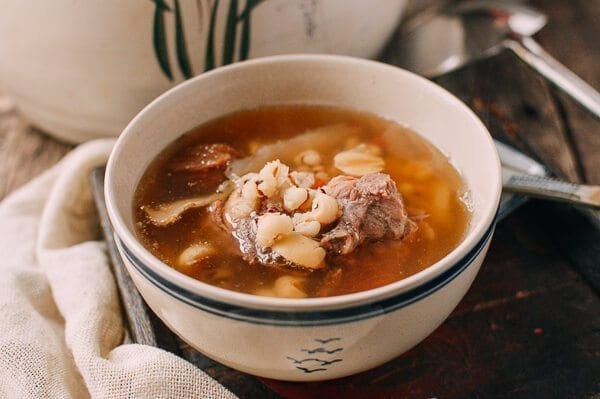 As you’ll see from the ingredients list, the rehydrated dried ingredients embody the essence of this soup. While we love that part of the soup, it’s worth mentioning that many people prefer to only enjoy the soup stock. To each his own and more for me, I say.

Judy helped me put together this recipe to make sure all of the Chinese ingredients were written and translated correctly, so here’s the recipe, plus some helpful tips from Judy: 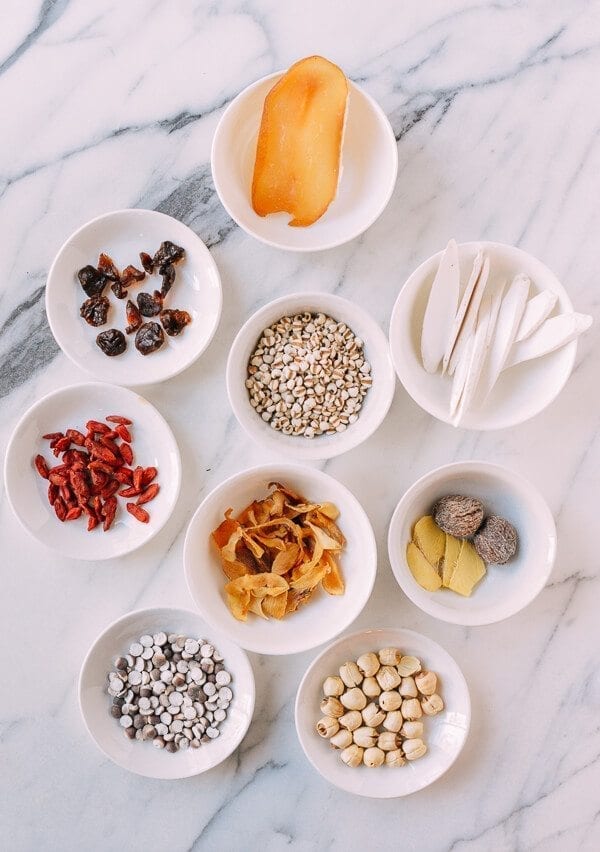 If all these ingredients sound daunting, then look for the pre-packaged ching bo leung soup mix at your local Chinese grocery store and follow the Chinese characters. It’s definitely easier having everything in one package for your soup. That said, any pre-packaged soup mix varies in its ingredients and this Ching Bo Leung soup is no different so don’t be surprised if pre-packaged soups like the one pictured below are missing or have extra ingredients! 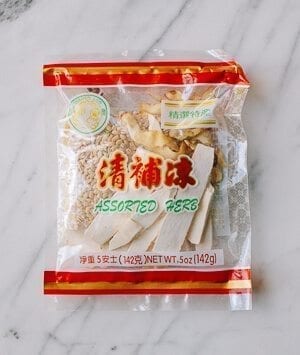 Soak the pork bones in cold water for an hour. Rinse thoroughly and drain. The soaking process helps to get rid of any impurities or blood, to keep the soup clear.

In a large stock pot, add the pork bones, and fill with enough cold water to fully submerge the pork bones. Turn up the heat and bring to a boil. Next, turn off the heat, dump everything into a colander, and rinse the pork bones clean. Wash the soup pot as well. This process will help to get rid of any remaining impurities in the pork bones to ensure a clear soup.

Now put the pork bones back in the pot, and add the ginger, all of the dried ingredients, and three quarts of cold water. 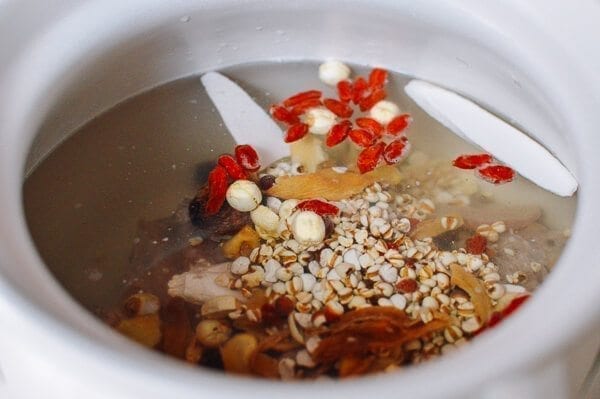 Bring everything to a boil, and then immediately turn the heat down to simmer. Let the soup simmer for 3 to 4 hours.

Before serving, skim off any fat from the surface of the soup. 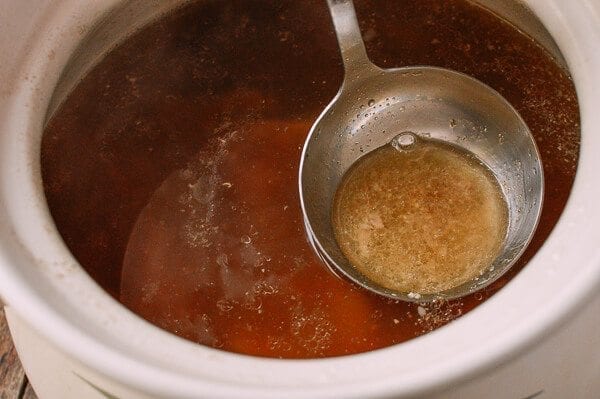 Salt to taste, and serve hot, along with some soy sauce on the table for dipping your pork into. 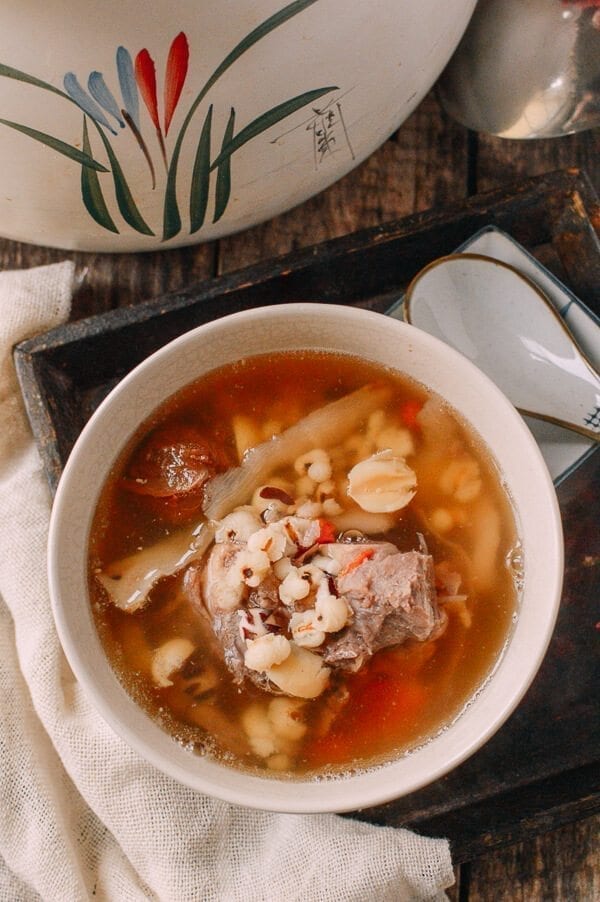 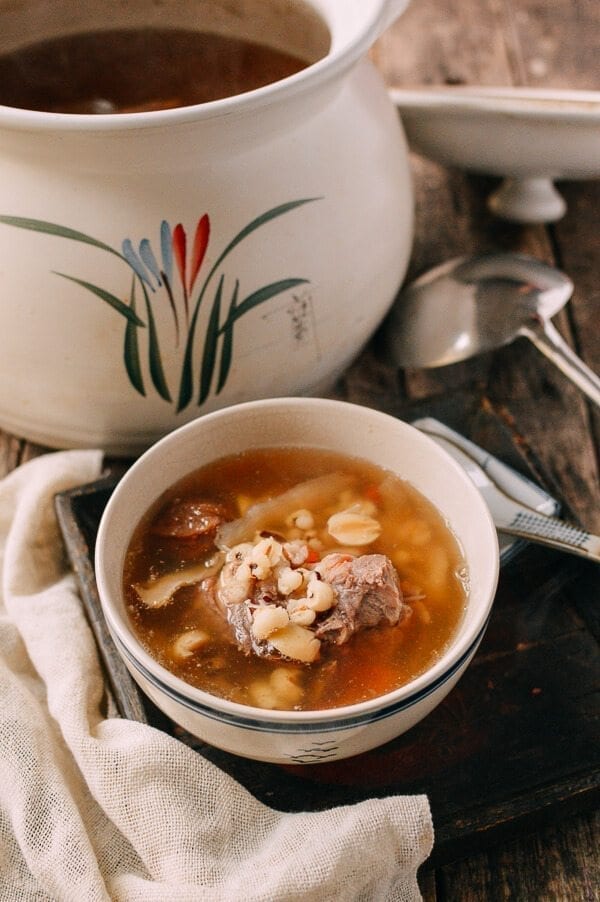