Did you know the Chinese Hamburger, or Rou Jia Mo (肉夹馍), was named Shaanxi Province’s Intangible Cultural Heritage of 2016? So the title doesn’t exactly roll off the tongue, but regardless, I’d say it’s a well-deserved honor!

From the Cuisine of Shaanxi Province

Many have not heard much about Shaanxi province in China, but you may have heard of its capital city, Xi’An, where you can find the legendary terracotta warriors.

For those of us who have visited Xi’an, we’ve had the chance to sample the amazing food there firsthand: Biang Noodles, Yang Rou Pao Mo (羊肉泡馍), Rou Jia Mo (肉夹馍), and many others.

A few years ago, we visited Muslim Street, i.e., Xi’An’s street food heaven. I’m still drooling over the photos of all the delicious snacks we gorged ourselves on.

What Is Rou Jia Mo?

The direct translation for Rou Jia Mo (肉夹馍) is “meat in a bun,” which sort of makes it similar to what we’d think of as a hamburger, or maybe a Chinese sloppy joe. So there’s the meat, and there’s the bun. Let’s talk about both.

After a bit of research, the meat filling is what’s called La Zhi Rou, 腊汁肉,which dates back over two thousand years! Pretty mind boggling that the Chinese were noshing on this delectable pork belly thousands of years ago.

I’m not sure though if La Zhi Rou was eaten as is, perhaps with rice, or in a bun, which led me to ponder the question: who was the original sandwich creator? The Chinese Earl of Sandwich, if you will.

The bun, aka “mo, 馍,” (the Northerners’ word for mantou, 馒头) is the Northern provinces’ main source of starch, rather than rice. Some “mo” are steamed and others are baked. In this case, the mo is baked in a wok or pan with the lid on.

In case you’re wondering, in China, Northerners and Southerners each have their own diet, their own customs, and their own words in many cases. For example, Northerners call their father “Da, 大” or Die,爹” and it’s “Ba, 爸” for the Southerners. Fun facts!

That said, I’ve witnessed the transformation of Chinese cuisine in America over the past thirty years. Chinese food is no longer limited to takeout and the formerly dominant Cantonese cuisine, which so many people simply recognized as “Chinese food.”

Now dishes from Sichuan (川菜)Shanghai (浙菜), Hunan (湘菜) and Shaanxi (秦菜) are represented under a much broader, and more accurate representation of what Chinese food is.

One of the stars of Shaanxi cuisine, Rou Jia Mo (Chinese hamburger), seems to be gaining momentum in the Western culinary world. All I know for sure is that more choices means more to eat, and I couldn’t be happier about that! 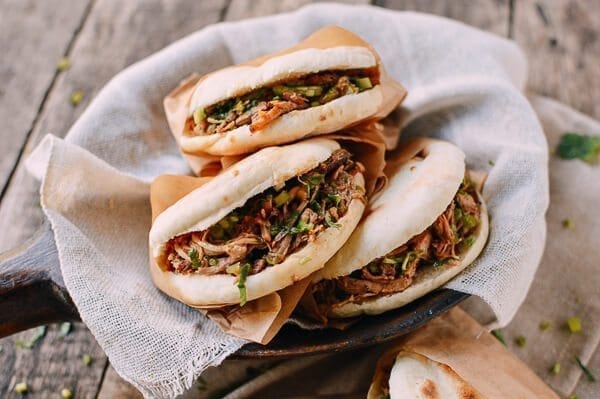 A few side notes before we get started:

Keep the pork belly whole, or cut it into large, 4- to 5-inch chunks. Place the pork belly in a medium pot, and fill it with just enough water to cover it. Bring the water to a boil.

Once the pork has gone opaque and appears cooked on the outside, shut off the heat, remove the pork from the pot, and rinse it clean under running water. Dump out the water and clean the pot.

Bring everything to a boil, then immediately turn down the heat to low and simmer for 90 minutes to 2 hours, until fork tender. To test it, stick a fork into the meat. It’s done if you can pull the fork out easily. Do not use high heat when simmering to avoid drying out the sauce. Add salt to taste.

While the pork is simmering, make the buns for your Chinese hamburgers. To a mixing bowl, add the flour, yeast, and salt. Slowly add the warm water, mixing and kneading until it forms a smooth dough ball. Once a dough ball is formed, knead it for another 10 minutes to build up the gluten in the dough–this will make the buns chewier.

You can also use an electric mixer with the dough hook attachment for this. The dough should feel soft and easy to work with. Cover the dough, and let it proof at room temperature for about an hour until it doubles in size. 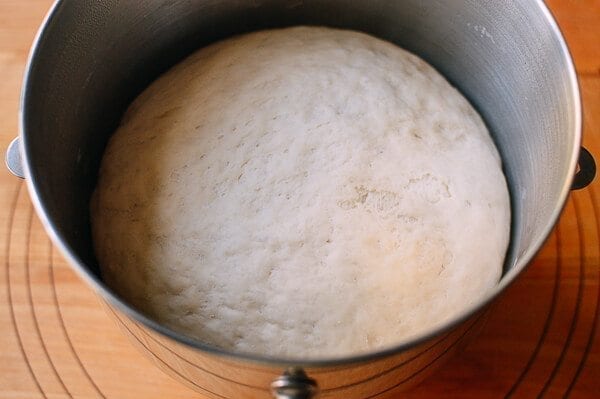 After proofing, knead the dough for about 5 minutes to get rid of any air bubbles. Divide the dough into 12 equal pieces. Cover the dough balls with a kitchen towel to prevent them from drying out while you’re shaping the buns. 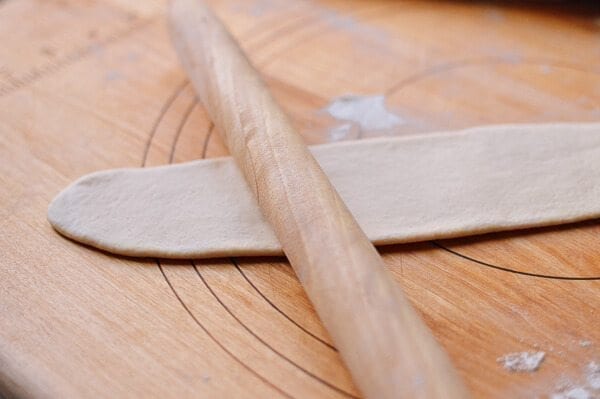 And fold it in half lengthwise. 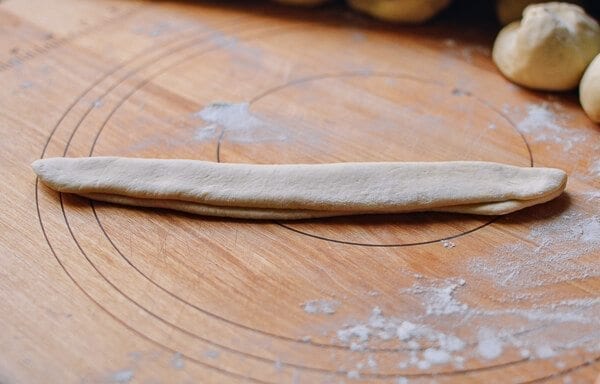 Roll it up into a bundle, with the loose end tucked underneath. 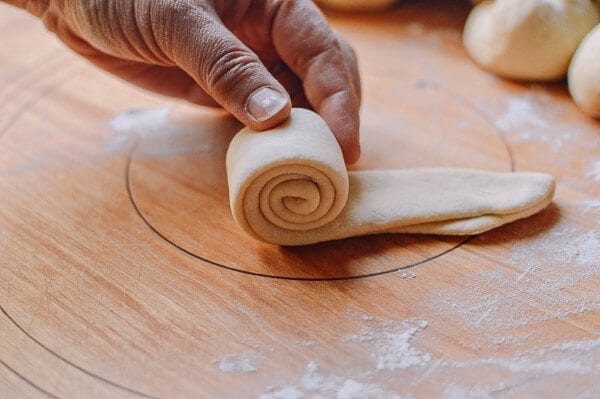 Turn it on its side, so that the swirls are facing up. 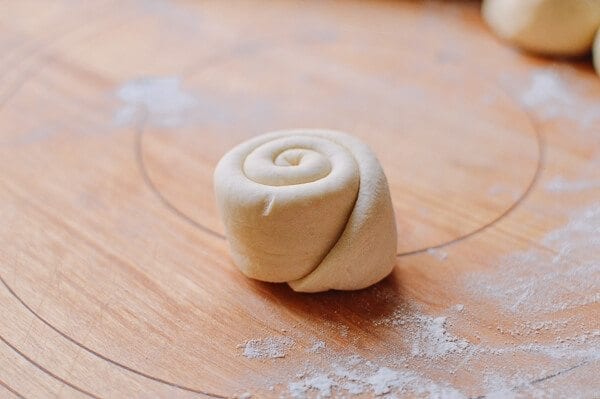 Press it down with your palm. 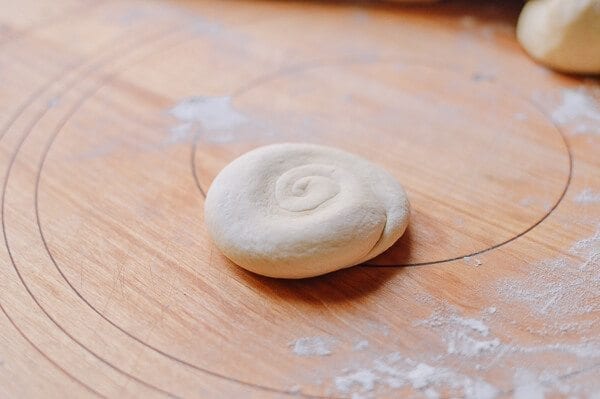 Now roll it out into a disc about 4 inches in diameter. Repeat these steps for all of the dough balls. Cover the shaped buns with a dry kitchen towel, and let rest for 20 minutes before cooking. 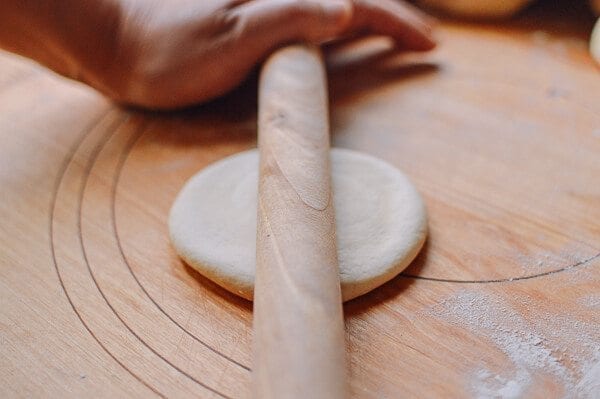 Pre-heat a flat-bottomed pan or cast-iron skillet over medium heat. Place the buns in the pan about an inch apart (no oil is necessary). Cover the lid, and let the buns cook for 2 minutes on each side. The heat shouldn’t be too high, or your buns may burn. No one likes burned buns. After cooking the buns for 2 minutes on each side, remove the lid, and cook each side for another minute or so until the entire bun is golden brown. 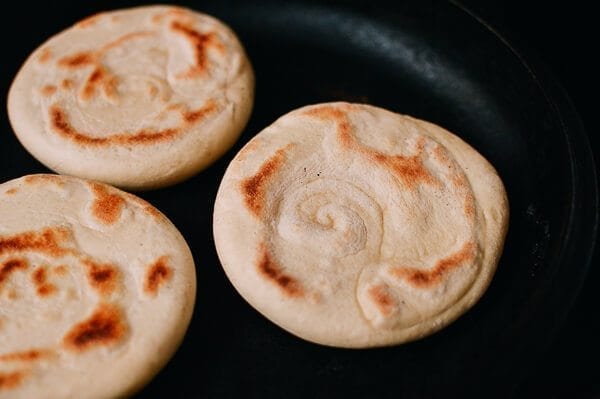 Continue in batches until the buns are all cooked. 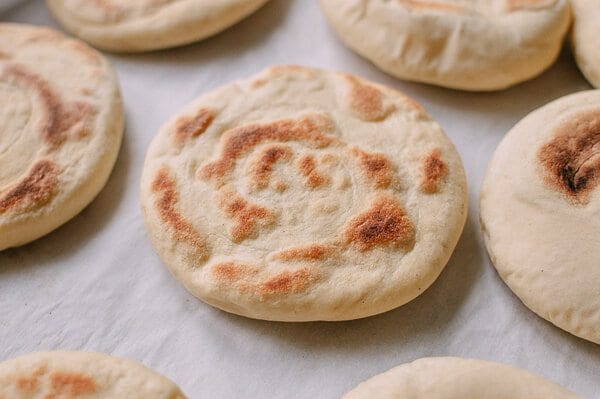 To serve, take out the pork, coarsely chop it, and transfer it to a bowl. Mix in the chopped cilantro, and add the sauce from the meat to your desired consistency. 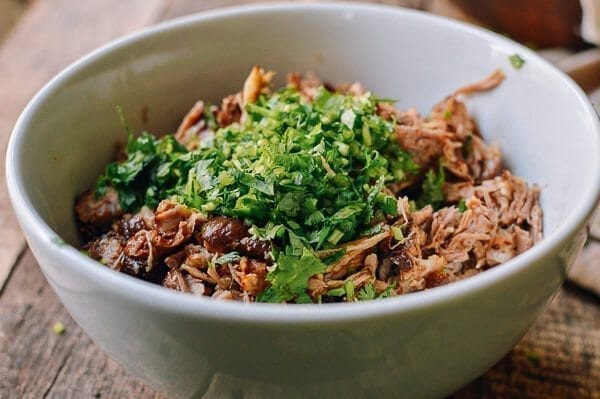 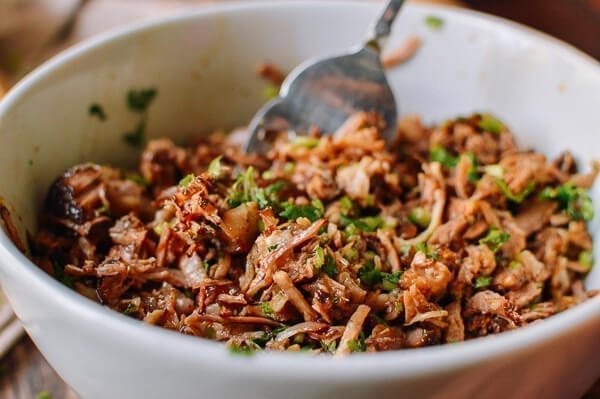 Think Asian sloppy joe–you could go really saucy or have a drier sandwich. Toss everything together, slice open a bun, load the meat inside… 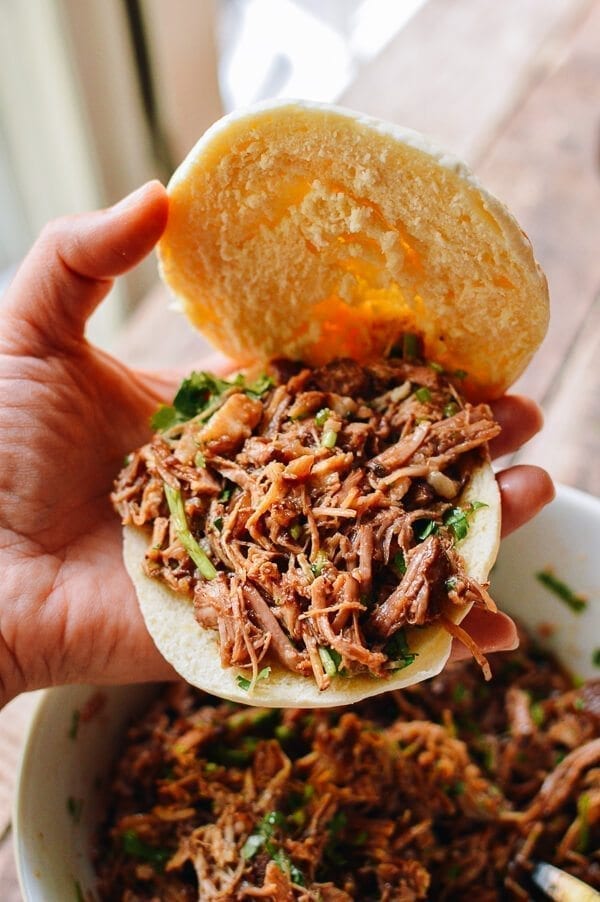 And it’s time to sink your teeth into this scrumptious little bundle of porky goodness, Rou Jia Mo Chinese Hamburger. 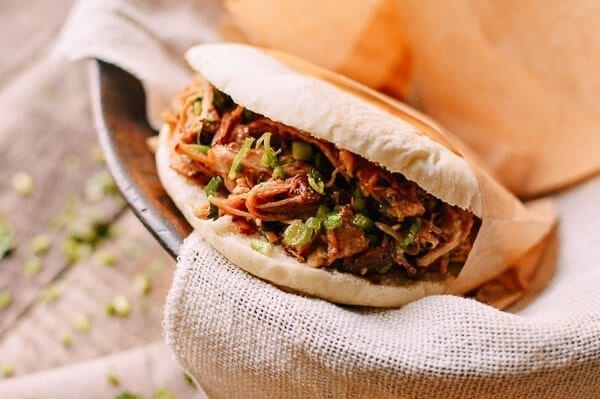 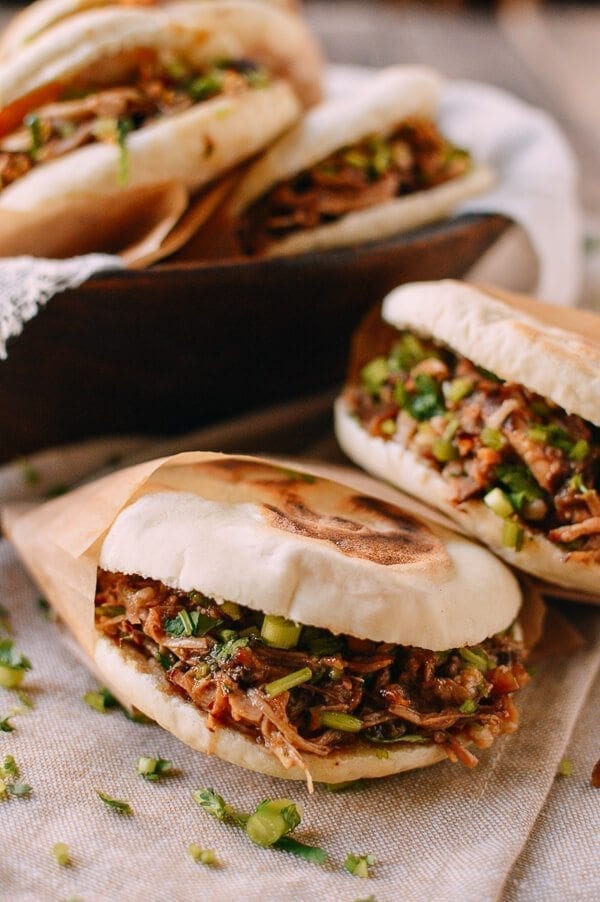